The series is a reimagining of L. Frank Baum's The Wonderful Wizard of Oz and it truly puts a modern twist to the original Oz. It contains numerous characters which can be related to characters from the story, including DG (Dorothy Gale), Glitch (the Scarecrow), Cain (the Tin Woodman, although Cain's profession is that of an officer of the law, or "Tin Man"), and Raw (the Cowardly Lion). As the series' plot unfolds, it is revealed that the setting is in the distant future of the Land of Oz.

In Tin Man, the story revolves around a young woman called DG (which we later find out stands for "Dorothy Gale"), who lives in Kansas. DG lives at home with her mother and father, but she begins to feel that she does not belong there for some reason, so she seeks a way to "get away from it all" and plans to go on a trip. However, DG (Deschanel) keeps having these strange dreams, and being an artist, she sketches everything to show her father. When her father sees the sketches, he tells his wife that DG is having "the dream".

Meanwhile, in a world far away from the world DG knows, the O.Z. is being run by the tyrannical ruler Azkadelia (Robertson), who sends her longcoat soldiers through a "travel storm" to find and kill DG. However, the longcoats do not succeed in their mission, as DG escapes through the time storm, with her parents jumping in after her just before the longcoats start shooting into the 'tornado'.

In the end, it turns out that the evil Azkadelia is in fact possessed by an evil witch who planned to overthrow the O.Z. DG is reunited with her real family as her parents from Kansas turn out to be robots. Azkadelia becomes her normal self again and reunites with her mother, father, and sister (DG). Light, peace, and prosperity is then restored to the O.Z. 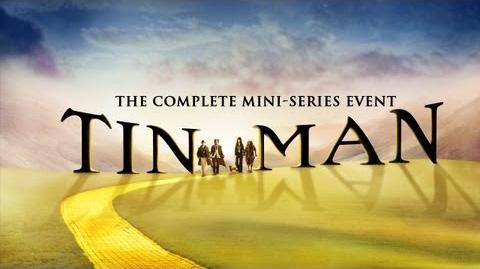 Cain the Tin Woodman, although Cain's profession is that of an officer of the law, or "Tin Man"

The Emerald of the Eclipse

Tin Suit that Cain was trap in

The Mystic Man in tinman

Queen Lavender Eyes with her daughters D.G. and Azkadellia

The Munchkins
Add a photo to this gallery

Retrieved from "https://oz.fandom.com/wiki/Tin_Man_(miniseries)?oldid=71355"
Community content is available under CC-BY-SA unless otherwise noted.