"Here we are together, searching for a dream."
―

"Gently close your eyes and listen to your heart."
―

The Wonderful Wizard of Oz, known in Japan as Oz no Mahōtsukai (オズの魔法使い), is an anime TV series created in 1986 loosely based on four of L. Frank Baum's Oz novels.

It was originally produced in Japan by Panmedia, and aired on TV Tokyo from 1986 to 1987. In 1987, HBO purchased the rights to the series, dubbed it into English, and broadcast it as The Wonderful Wizard of Oz. Production for the English version was done by the Canadian company Cinar Films, now known as Cookie Jar Group. Margot Kidder, known for her iconic role as Lois Lane in the 1978 movie Superman and its sequels, was hired as the narrator for the English version. (There is no narration in the Japanese version.) The Canadian group Parachute Club provided songs for the series and the movies that would be based on the series, including the opening theme, Searching For a Dream.

The series can be split into four distinct story arcs, each freely adapted from four different Oz books written by L. Frank Baum. Season 1 is based on The Wonderful Wizard of Oz, season 2 on The Marvelous Land of Oz, season 3 on Ozma of Oz, and season 4 onThe Emerald City of Oz. The Emerald City of Oz is actually the 6th Oz book. The events of Dorothy and the Wizard in Oz and The Road to Oz are not included in the series. The series becomes progressively less faithful to the books, although the essential plots are based on Baum's original stories. The most significant difference of all is that Dorothy Gale does not end up moving to the Land of Oz with Aunt Em and Uncle Henry as in Baum's books. Her home remains Kansas at the end of the series, thereby preserving the famous adage about home from Baum's very first book.

We are introduced to Dorothy's life in Kansas with her Uncle Henry and Aunt Em. Uncle Henry and Aunt Em are concerned as this is the season for tonaadoes, so Uncle Henry shows Dorothy the storm cellar and tells her to go there when she sees a tornado. Uncle Henry brings home a surprise for Dorothy, a little black dog who Dorothy named Toto. While Uncle Henry and Aunt Em are heading into town, a twister approaches. Dorothy remembers to go into the storm cellar, but Toto hides under the bed and she refused to go down without him. Before Dorothy can get Toto from under the bed, the tornado carries the house away. When the house finally lands, she steps outside and finds herself in a strange and beautiful land. The Witch of the North appears and explains to Dorothy that she is in Oz, and to return home to Kansas, Dorothy should fallow the Yellow Brick Road to the Emerald City, where she will find the Wizard of Oz. Along the way, Dorothy and Toto meet a Scarecrow, who wants a brain, Tin Man, who wants a heart, and a Cowardly Lion, who wants courage. They all head to the Emerald City and meet the Wizard, but must destroy the Wicked Witch of the West to do it.

In one episode, events happen that do not happen in the book. Mombi, an aspiring witch, and her apprentice Tip come to the land of the West to meet the Wicked Witch of the West  Mombi came to learn magic from the witch, but is disappointed to find out that she was killed by Dorothy. She turns herself into a cat and tries to steal the Golden Cap that Dorothy had just obtained from the wicked witch, but fails. Dorothy meets Tip, so says he's Mombi's apprentice. Dorothy uses the first wish of the Golden Cap to send Mombi and Tip back home.

When Dorothy finally goes home using the magic silver shoes, she keeps them, unlike the book, but loses one of them in the field she lands in, but forgets about it as she is anxious to see Uncle Henry and Aunt Em again.

Uncle Henry and Aunt Em have just finished building a new farm house to replace the old house that was carried off by the tornado, and are almost finished with the barn also damaged by the tornado. Toto runs to meet Uncle Henry and Aunt Em, followed by Dorothy. Dorothy tells Uncle Henry and Aunt Em about her adventures in Oz. They don't believe her at first, but she doesn't seem like she's lying, so they are puzzled. Dorothy realizes she lost her other magic shoe and looks for it in the field but no luck. Uncle Henry and Aunt Em take Dorothy to town. They are reluctant to leave her behind again and they have a surprise. They take her to the circus, where she sees none other than the Wizard. She tries to talk to the Wizard, but Aunt Em and Uncle Henry thinks it's just a stranger, and other circus workers laugh at them both. The Wizard does recognize Dorothy, and the two talk for a bit. The Wizard misses Oz, but tells Dorothy that it's best not to talk about it, since nobody believes him either. She goes back and says that he was just a stranger, even though he looked like the Wizard.

Dorothy finds the other magic shoe. She is so excited about being able to visit Oz and come back and talks about going to Oz to visit her friends and being able to take her Uncle Henry and Aunt Em there. Holding them, she tries clicking the heels together. Having mentioned Oz, the shoes magically whisk her there, but she drops them before they do. Uncle Henry and Aunt Em realize Dorothy has disappeared, and now are starting to beleve in Oz. They realize that if the shoes took her to Oz, and are still in Kansas, then she is streanted in Oz.

Dorothy realizes that she is stranded in Oz and deeply regrets that she didn't put the shoes on before trying to click the heels. Dorothy didn't specify any particular place in Oz she wanted to go when saying how great it would be to visit Oz again. She ends up in Gillikin Country in the northern part of Oz. She meets the Tip again, who shows her the pumpkin headed man he's building that would become Jack Pumpkinhead. She leaves with Tip to escape the witch Mombi, and finds out that General Jinjur is plotting to take over the Emerald City. Dorothy wants to go home, but decides to stay in Oz until she helps her friends stop her and Mombi from conquering Oz. So she finds herself setting out on a new journey with Tip, Jack Pumpkinhead, the Sawhorse, Scarecrow, and Tin Man to free Oz from the tyrannical rule of General Jinjur, search for Ozma, the true heir of the throne, and to find out how to get back home to Kansas without her magic shoes. At the end of their journey, Glinda uses her magic to send Dorothy home.

The major differences from the original novel is that Dorothy is present, Wogglebug is absent, and the Gump is referred to as the Moose Bed.

( * Referred to as the "Moose Bed" in the series. He does not talk in the series.) ( ** Renamed "Princess Lulu" in the English dub. Apart from the name change, the moody and haughty Princess of Ev had a collection of hats, rather than heads. The change was presumably made to soften the character for young children.)

Notes: English title provided along with Japanese in parenthesis

Comparison with the original stories

To give it a secondary market, episodes of the show were later re-edited into four films and released on video and DVD, in which major plots and storylines are removed in favor of cutting each story-arc down into their retrospective book-canon story. The uncut Japanese version was released in the US on SD Blu-ray by Discotek, as was an English dub version. The show aired in Australia and the UK multiple times in the early 1990s in the full episodic format on the ABC and ITV channels respectively. The full original Japanese version is available for purchase at YesAsia. 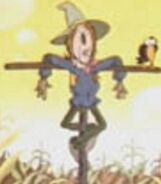 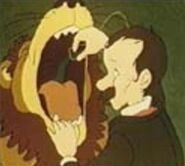 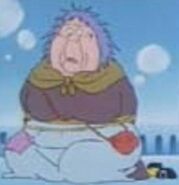 Retrieved from "https://oz.fandom.com/wiki/The_Wonderful_Wizard_of_Oz_(anime)?oldid=74072"
Community content is available under CC-BY-SA unless otherwise noted.