The Wizard of Oz (オズの魔法使い Ozu no Mahōtsukai) is a 1983 Japanese 10-minute original video animation (OVA).

In the United States, it was dubbed in English and released as part of Volume 4 in the My Favorite Fairy Tales video series, produced in 1986 by Saban Productions and released in 1987 by Hi-Tops Video. It was re-released twice: In 1990 by Video Treasures, and in 1995 by Anchor Bay Entertainment.

In 2004, Digiview Productions (later Digiview Entertainment), a budget distributor of mostly public domain cartoons, released this on DVD, along with other cartoons, as part of their "Cartoon Craze" series. 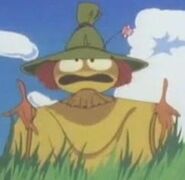 Retrieved from "https://oz.fandom.com/wiki/The_Wizard_of_Oz_(OVA)?oldid=62580"
Community content is available under CC-BY-SA unless otherwise noted.