Although the set claims to be an "Original Cast Album", the songs were not, in fact, the versions used in the movie itself. In anticipation of the film's release, Decca had Judy Garland record "Somewhere Over the Rainbow" and "The Jitterbug" for a single release. The latter song was cut from the movie; in this version the Ken Darby Trio takes the part of the Cowardly Lion (Garney Bell), the Tin Woodman (Bud Lyon), and the Scarecrow (Harold Arlen, also the composer of the music). In early 1940, the two songs were packaged with other music from the movie, recorded by the Ken Darby Trio and backed by Victor Young and His Orchestra, to create this 4-disk set. Judy Garland is the only cast member to actually appear on the album.

The inside of the covers included 22 stills from the movie with narrative text telling the entire story. There were also signatures from Judy Garland and the composers (Harold Arlen, and E.Y. Harburg). A 6-page foldout brochure was included with the set which contained a list of the songs from the four records and biographical notes on the composers.

This set was later rereleased many times, on multiple formats, all the way until the 1980's. This entire album has not yet been released on CD, although Judy Garland's solo songs have appeared on various compilations. 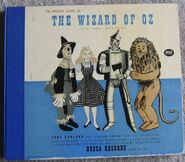 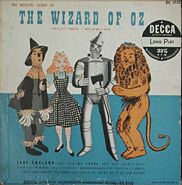 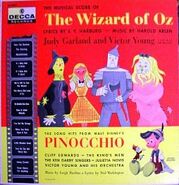 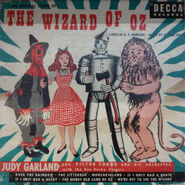 Decca 9-325
Add a photo to this gallery
Retrieved from "https://oz.fandom.com/wiki/The_Wizard_of_Oz_(Decca)?oldid=62272"
Community content is available under CC-BY-SA unless otherwise noted.