The 1925 film adaptation of The Wizard of Oz, released by Chadwick Pictures, is largely forgotten — remembered mainly because the Tin Woodman was played by Oliver Hardy prior to his partnership with Stan Laurel.

The film starred comedian Larry Semon as the Scarecrow, and was primarily a vehicle for Semon's comedy (he also directed). Dorothy Gale was played by Mrs. Semon, the actress Dorothy Dwan. The script was credited to L. Frank Baum's eldest son Frank Joslyn Baum (as "L. Frank Baum, Jr.") and Leon Lee.

The film script departed vastly from Baum's books. Dorothy is an Ozian princess and the heir to the throne, who was kidnapped as a baby and taken to Kansas. A love triangle develops among the 18-year-old Dorothy, the Scarecrow and Tin Woodman; the latter, disappointed in love, connives with the piece's villain, prime minister Kruel. In the end, Princess Dorothea marries her destined match, Prince Kynd. (Kruel and Kynd are from Baum's ninth Oz novel, The Scarecrow of Oz.)

In this film the Scarecrow, Tin Woodman, and Cowardly Lion are not real characters, but merely disguises adopted by three farmhands blown to Oz by tornado. (The third farmhand is an African-American character, played by Spencer Bell under the Jim-Crow stage name "G. Howe Black.")

The film was an expensive flop that bankrupted the studio that made it. 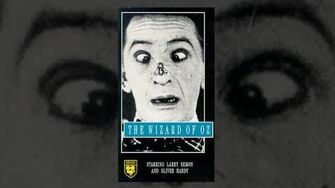 Retrieved from "https://oz.fandom.com/wiki/The_Wizard_of_Oz_(1925)?oldid=70318"
Community content is available under CC-BY-SA unless otherwise noted.