"Don't you read the classics? You're in the Land of Oz! And all you have to do to get out is find the Wizard."
―Mr. Mxyzptlk

"Well well, it looks like the Man of Steel is now the Man of Tin!"
―Mr. Mxyzptlk

"You might say it took us...somewhere over the rainbow."
―Superman, speaking of the tornado

The Planet of Oz was the title of an episode of The World's Greatest Super Friends which was part of the long-running animated television series, Super Friends.

In the episode, Mr. Mxyzptlk (pronounced "Mixle Plick"), a criminal magical imp from the 5th dimension, creates a world patterned loosely on the Land of Oz and uses a tornado to trap Superman, Wonder Woman, and Aquaman on it. Superman was turned into a version of the Tin Woodman, Wonder Woman was turned into a female version of the Cowardly Lion, and Aquaman became a version of the Scarecrow. Mxyzptlk himself pretended to be the Wizard of Oz and also posed as the "Wicked Witch of the Worst Kind". The Munchkins on the planet of Oz were enemies of the Superfriends, and looked and sounded very much like Jawas from Star Wars.

As the episode begins, a tornado is rampaging through Metropolis, Superman's home city and also the location of the Super Friends' headquarters, the Hall of Justice. Bat-Man is flying the Bat Copter, and decides to fly into the eye of the tornado because he's not getting good enough readings from outside. Robin and the Wonder Twins, Zan and Jana, are in the Bat Blimp are nearby, keeping their weather scanners locked in. Superman, Wonder Woman, and Aquaman are coordinating things back at the Hall of Justice. Bat-Man instructs Robin to fire the ion static ray, which should break up the tornado. It doesn't work, though, and Bat-Man says it's headed straight for the Hall of Justice. Superman thinks he can use his super breath to stop the tornado, but before he gets a chance to try it, the tornado hits the Hall of Justice, picking it up and sending it flying just like Dorothy's house, and carries it to the world of Oz. Superman tries to contact Bat-Man, but the radio is jammed, so the three heroes decide to check outside. Mr. Mxyzptlk appears, boasting that he's escaped the 5th dimension again. He tells them they're in the land of Oz, and all they have to do to get out is find the Wizard, and tells them to "just follow the yellow brick road". The Super Friends have no choice to do what Mxyzptlk says for now, but they need to find a way to trick him into saying his name backwards. If Mxyzptlk says his name backwards, he will be banished back to the 5th dimension for three months, and all his works of magic since his last escape will be undone.

Further down the yellow brick road, they are stopped as a giant Venus fly trap blocks the road. Superman tries to fly over and take care of it, but he cannot fly. The group's super powers are altered in this world. The three heroes make a run for it and take cover inside a strange gingerbread house, and it's revealed that the plant was just one of Mxyzptlk's tricks. The door closes behind them, locking them in, and a bat flies around and then turns into a witch, who introduces herself as the Wicked Witch of the Worst Kind. She says she's glad to have them for dinner—to be dinner. Three brooms with arms fly over and drop the heroes in a pot of witch's brew, and a forcefield prevents them from moving. But Superman manages to break them free with his super strength. Then the witch casts a spell that turns the three into characters from Oz. Wonder Woman becomes the Cowardly Lion, Aquaman becomes the Scarecrow, and Superman becomes the Tin Woodman. The Witch is actually Mxyzptlk, who tells them they should have stayed on the yellow brick road.

Further down the road, a flock of crows attacks the group, mostly Aquaman since he's the Scarecrow, and they pick him up and fly off with him. Aquaman breaks free above a river, but as he falls in, and despite being the "King of the Sead" and very much used to water, his straw body becomes water logged and he can't swim like he normally can. So he uses his aquatic telepathy to call for help from any sea creatures around. A jellyfish responds and coats his straw body with a waterproof gel that allows him to swim, and just before being washed over a deadly waterfall. Mxyzptlk is watching his magic mirror and says Aquaman has accomplished the first part of his mission, and then speaks a line remniscent of Snow White. "Mirror, mirror on the wall, who's the fairest of them all?" The mirror responds, "Mxyzptlk, it isn't you. Next to Wonder Woman, you're number two."

Meanwhile, Wonder Woman wants to go rescue Aquaman, but Superman reminds her that Mxyzptlk said not to stray from the yellow brick road. Wonder Woman starts to wander off anyway, and is sucked through the ground into a subterranean swamp. She is chased by a pack of wild boars, but manages to escape up a tree. She can't telepathically control her magic lasso, and the branch is about to break, but she makes a kite of tree bark, ties it to the end of her lasso, and flies it up into an approaching storm to attract lighning, similar to Benjamin Franklin's experiment. The lasso is struck by lightning and electrically charged, which scares the boars away, just as the branch breaks. Mxyzptlk is watching his magic mirror, revealing that he was one of the boars, and says Wonder Woman has accomplished the second part of his mission, and now it's Superman's turn.

As Superman continues down the yellow brick road, it suddenly begins to rain, causing Superman's tin body to rust. To make matters worse, the yellow brick road turns into green kryptonite, the only substance Superman is vulnerable to, and he weakens and can't get away from it. Mxyzptlk appears and taunts him. Superman tries to trick him into saying his name backwards by saying, "You're nothing but a 'slippleskim'!" (pronunciation of his backwards name) Mxyzptlk almost falls for it, but catches himself. Superman uses his heat vision to turn his tin body into lead, which does not rust like tin and protects him from the affects of kryptonite. His suit is all gray after he does this. The group is reunited and they each tell their story briefly. They decide that this all sounds like one of Mxyzptlk's schemes.

Further down the yellow brick road, they encounter creatures that look like and speak a language remarkably similar to Jawas from Star Wars. They seem to be Mxyzptlk's version of the Munchkins, but they're not very friendly. They tie the group up and throw them into a giant hourglass. The sand goes down to the bottom, pulling them under, where a monster that looks like a giant sea serpent awaits them. Superman tries to stop the monster, but the monster is too powerful. But then the monster ducks under, and the super heroes are pulled down and fall into what looks like a sand tornado. They land near a giant building that looks like a smaller version of the Emerald City. They have apparently found the Wizard.

They approach the door to the building, which is huge, meaning the Wizard must be a giant. There is a giant lock on the door, and a giant key on the ground. Superman throws the giant key into the lock with his super strength, and Wonder Woman uses her lasso to turn it, and the door opens. They enter a throne room full of sparkling emeralds. The throne is empty at the moment, but the Wizard appears and asks who is foolish enough to summon the Wizard of Oz. Superman tells the Wizard that they were told he would be able to get them out of this strange world by Mxyzptlk, a cosmic criminal from the 5th dimension. The Wizard said he lied. Superman is disappointed because he thought he was a good wizard. But the Wizard reveals himself to be Mxyzptlk and shrinks down from a giant to his own small size, remniscent of the Wizard turning out to be a humbug, but that's not the case here. Mxyzptlk turns the group back to their normal forms, but reveals that they helped him accomplish his mission. Aquaman had his straw coated with a waterproof gel, turning it into grassius oxide. By electrically charging her lasso, Wonder Woman created electrolasoosius, and Superman created kryptoleadonium by turning his tin body into lead to protect himself from the kryptonite. These are the ingredients Mxyzptlk needed to create a potion that would allow him to stay in the physical dimension forever and never be sent back to the 5th dimension again. He drinks the potion and gloats, saying he's unstoppable. Superman challenges him to say his name backwards and prove it. He refuses, saying he doesn't have to prove anything. Superman says he's full of hot air and not clever enough to pull something like that off. Mxyzptlk, at having his pride insulted, decides to show him, so he says his name backwards. "Slippleskim!" But after saying his name backwards, he starts to fade away, and wonders why it didn't work. The heroes reveal that they already figured out his scheme, and Superman had already turned his kryptoleadonium suit back into tin. He drank the wrong formula. Mxyzptlk whines in defeat and promises revenge, as he disappears back into the 5th dimension, and his world of Oz he created disappears as well.

The Hall of Justice is back where it's supposed to be, and the three heroes are home safe, and the rest of their friends come to greet them. When asked where the tornado took them, Superman smiles and jokingly says, "You might say it took us...somewhere over the rainbow."

Planet of Oz - Tornado in Metropolis

Planet of Oz - The Hall of Justice carried to Oz undemolished, just like Dorothy's house.

"Just follow the yellow brick road". It even has a bit of a spiral like the 1939 movie.

A gingerbread house in Oz?

The Wicked Witch of the Worst Kind (Mr. Mxyzptlk) turned the super heroes to Oz characters. Superman (left) is the Tin Woodman, Wonder Woman (center) is the Cowardly Lion, and Aquaman (right) is the Scarecrow.

In "The Planet of Oz", the crows carry away Aquaman. He's the Scarecrow, go figure.

"Mirror mirror on the wall..." --Mr. Mxyzptlk. "Planet of Oz" includes an ode to Snow White.

Superman rusts in "Planet of Oz". 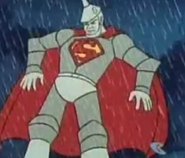 Superman turns his tin body into lead, which is rustproof. 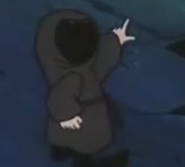 Munchkins, or Jawas? Either way, they're not very friendly in "Planet of Oz".

The Wizard, at last! A small version of the Emerald City in "Planet of Oz".

The Wizard in the Super Friends episode "Planet of Oz"

Just a humbug? Not quite. Mr. Mxyzptlk was the Wizard in "Planet of Oz", and he's a big trickster.

The Super Friends are home safe after their adventures through Mxyzptlk's twisted Oz-like world in "Planet of Oz".

"You might say it took us...somewhere over the rainbow." --Superman, "Planet of Oz"
Add a photo to this gallery

Retrieved from "https://oz.fandom.com/wiki/The_Planet_of_Oz?oldid=69398"
Community content is available under CC-BY-SA unless otherwise noted.