The five-reel film was the first produced by Baum's company. It was directed by J. Farrell MacDonald and featured Violet MacMillan as Ojo, with Frank Moore as Unc Nunkie, and Fred Woodward tripling roles as the Woozy, Mewel the mule, and a mysterious creature called the Zoop. Harold Lloyd played the Cowardly Lion and a Tottenhot. The title role of Scraps was filled by French acrobat Pierre Couderc.

The film was completed in July 1914 and distributed by Paramount Pictures, but was not a commercial success. Its failure impacted the distribution of the subsequent Oz company films, and led to the firm's early collapse.

It was mentioned in a September edition of Moving Picture World aside from an ad co-promoting The Magic Cloak of Oz in a small blurb entiled "Oz Company Will Release Through Paramount":

The Oz Film Company of Los Angeles, Cal., whose first release is "The Patchwork Girl of Oz" has signed contracts with the Paramount Pictures for this and future projects. The Patchwork Girl is quite unique and quite different from anything that has been produced in motion pictures. It is released in five parts and will be released September 25. Frank J. Baum, publicity man for the Oz Company, was in New York last week looking after the interests of the company.

Living in a lonely forest in the Munchkin Country of the Land of Oz with Unc Nunkie is Ojo, an orphan boy. Ojo discovers that their supply of food is gone so he and Unc Nunkie start for Emerald City where there is plenty. Before they reach the city they stop at the house of Dr. Pipt who has completed a magic concoction which, when applied to any inanimate object, will infuse it with life. The wife of Dr. Pipt, Margolotte,  has become tired of doing her housework and makes a dummy girl of a patchwork quilt whom she proposes to use as a servant, after applying the magic lotion. Ojo asks Margolotte if she is going to give the servant brains, and he learns such persons do not need any. Whereupon he injects too much of the magic brains invented by Dr. Pipt with a result that when the patchwork is brought to life she has a superaubunance of gray matter. This so startles Unc Nunkie that he knocks a bottle off the shelf containing pertifying liquid which falls upon himself, Margolotte, and Danx, sweetheart of Jesseva and daughter of the magician, turning them into stone. In order to bring them back to life again Dr. Pipt tells the bereaved ones, Ojo and Jesseva that it will take six years to make some more of the powder of life which has been spilled. As he is too tired to start working on this powder, he finds in his book of magical recipes an antidote for petrifaction consisting of three hairs from a Woozy's tail and a six-leaf clover to be mixed in a pail of water taken from a dark well. Before the doctor, Ojo, and Jesseva start out to look for the necessary ingredients, Dr. Pipt, at the request of his daughter, reduces the statue of Danx to six inches so that she may carry it around with her.

The pranks of the Patchwork Girl cause the doctor so much annoyance that he throws her away, but she comes back again on the assumption that she is now one of the family. Ojo, Jesseva, the Patchwork Girl and some of Jesseva's friends start to look for the Woozy and a six-leaf clover while the doctor himself hunts for water from a dark well. Ojo and his co-workers come across the Woozy, but cannot pull the hairs from his tail, so they take it with them. When they are but a short distance from Emerald City, Ojo discovers a six-leaf clover but is told by Jinjur, an inhabitant of Emerald City, that it is a violation of the law of Oz to pluck one. But Ojo's desire to bring back his Unc breaks the law and places the clover in Jesseva's basket. This act is witnessed by Jinjur, who informs the officers of what has been committed when she is refused the statue of Danx, and all of the Munchkin are attired in prisoner's garb and marched through the streets. Jinjur proclaims that the statue belongs to her and the officers immediately take it from Jesseva and give it to her. The Patchwork Girl observes what has been perpetrated, follows Jinjur, succeeds in overtaking her, and replevining the statue. Not recognizing her friends as they are being marched through the streets in prisoner's garb, the Patchwork Girl goes to the mountain country, where she rescues Dr. Pipt, who has been having trouble in his wandering from a dark well, from Hoppertown where only one-legged men are allowed by condescending to one of their legs amputated in place of his. After several other trying experiences Dr. Pipt and the Patchwork Girl succeed in finding a dark well from which they draw the precious water. Jinjur overtakes them as they are on their way to the Emerald City to aid their friends and snatches the statue from the Patchwork Girl.

The trial of the prisoners is about to be called before Ozma, the ruler of Emerald City, when the Scarecrow of Oz, one of the jurymen is too good-natured to decide what punishment shall be meted out to the offenders, escapes. He meets Dr. Pipt and the Patchwork Girl and falls in love with the latter. At the palace of Ozma, Dr. Pipt entreats Her Majesty to let him use the six-leaf clover in a concoction which he is to prepare to bring his petrified wife to life again. Ozma consents, but as it must be done in her presence and as the statues are some distance away, the Wizard of Oz prepares a magic which brings the statues of Unc Nunkie and Margolotte in her presence, but the one of Danx is missing. Presently Jinjur appears with the small statue of Danx, and she is accused of theft by Dr. Pipt. The accused is ordered by Her Majesty to relinquish the statue to which demand she complies. Dr. Pipt then cuts three hairs from the Woozy's tail, which he mixes in the precious water with the much desired clover. The magic thus produced he sprinkles it upon the statues and they all come back to life. As Danx is still in his diminutive size, Dr. Pipt soon remedies this, bringing him to his natural size by the application of more of his magic compound. 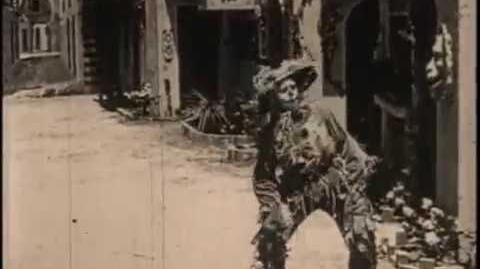 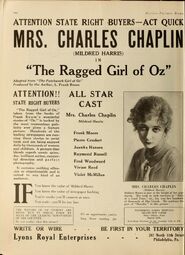 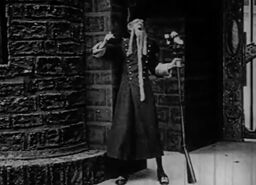 The Soldier with the Green Whiskers stretches and yawns. 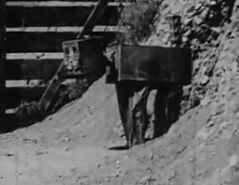 The Woozy emerges from his cave. 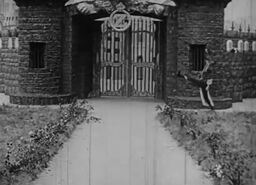 The Gate to the Emerald City, patrolled by the Soldier with the Green Whiskers. 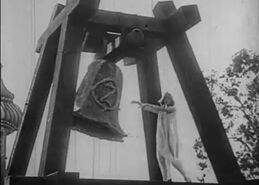 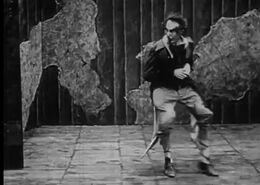 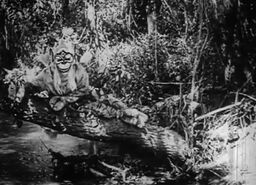 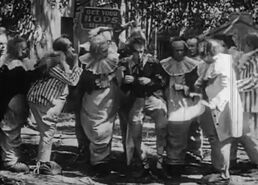 Dr. Pipt and the Hoppers. 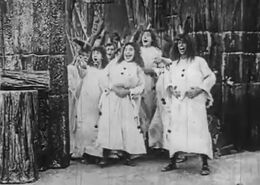 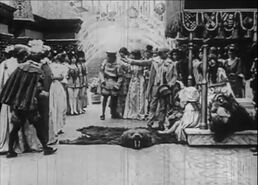 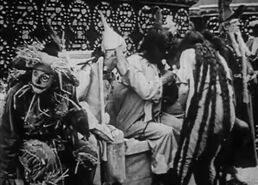 The jury at Ojo's trial, including the Scarecrow and Tin Man. 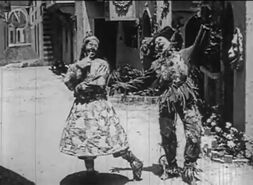 The Scarecrow and Patchwork Girl meet. 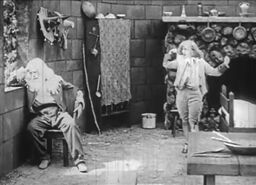 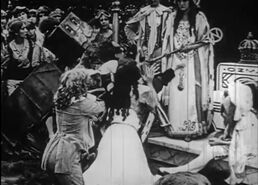 The party begs Ozma for forgiveness. 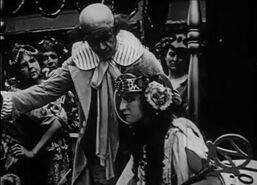 Ozma and the Wizard of Oz deliberate.
Add a photo to this gallery

Retrieved from "https://oz.fandom.com/wiki/The_Patchwork_Girl_of_Oz_(film)?oldid=69865"
Community content is available under CC-BY-SA unless otherwise noted.