The LEGO Movie is a 2014 Warner Brothers computer-animated film, set mostly in a universe made entirely out of LEGO.  It became such a success, that WB comissioned several spin-offs and follow-ups.  Some of these projects, and their respective toylines, contain appearances of characters from the 1939 film version of The Wizard of Oz .

When The Joker (Zach Galifianakis) watches a news report about villains imprisoned in the Phantom Zone, one prisoner (Riki Lindhome) cackles, "I'll get you, my pretty!"  After Joker orchestrates his banishment into the Phantom Zone, he escapes with several powerful villains in tow, including the Wicked Witch of the West.  With help from her Flying Monkeys, she and the other escapees wreak havoc on Gotham City. Eventually Robin (Michael Cera) sends her back into the Phantom Zone. 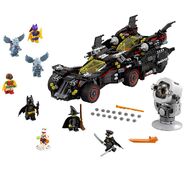 The Ultimate Batmobile box
Add a photo to this gallery

Emmet (Chris Pratt) meets Dorothy Gale, Scarecrow, Tin Man, Cowardly Lion, and Toto in a brief parody of "We're Off to See the Wizard", when the aptly-named "Catchy Song" sends everyone dancing through the idylic suburbs of Harmony Town.  Later, the Tin Man helps support Queen Watevra Wa'Nabi of the Systar System (Tiffany Haddish) during her wedding to Batman (Will Arnett), the self-proclaimed "leader" of Apocalypseburg; the Tin Man's friends attend the ceremony along with other denizens of both realms.  Unfortunately, the wedding gets cut short when Emmet accidentally starts "Ourmamageddon", banishing all of the LEGO people to the "Bin of Storaj".  When Lucy (Elizabeth Banks) leads an escape out of the bin, Dorothy and her pals come along after building their own spacecraft.  Presumably they eventually take up new residence in the world of "Syspocalypsestar", born from the union between the repaired Queen Wa'Nabi and Batman.

Dorothy and her friends each received a Collectible Minifigure to promote The LEGO Movie 2, which happened to premiere during the 80th anniversary of The Wizard of Oz. This marked the first time LEGO produced minifigures of Oz's heroes. WB and Wal-Mart also re-released The Wizard of Oz on DVD, with a lenticular slipcover switching between the 2005 Collector's Edition cover (in which the Wicked Witch watches her adversaries in her crystal ball) and an image of the Wicked Witch of the West's minifigure flashing a sinister grin. 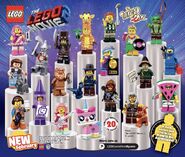 Group Shot of the Collectible Minifigures 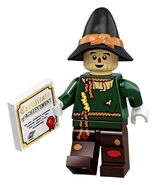 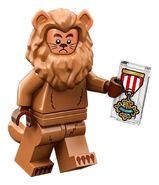 Cowardly Lion
Add a photo to this gallery

Retrieved from "https://oz.fandom.com/wiki/The_LEGO_Movie?oldid=74686"
Community content is available under CC-BY-SA unless otherwise noted.