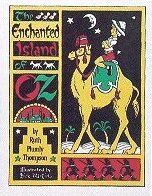 The Enchanted Island of Oz

The International Wizard of Oz Club

The Enchanted Island of Oz is an Oz book written by Ruth Plumly Thompson and illustrated by Dick Martin. It is not one of the "Famous Forty" since it was not published by Reilly & Lee and was written after the author's retirement. Published in 1976, it is the author's last Oz novel, and one of two late Oz works, written in addition to the nineteen she contributed to the "Famous Forty" in the 1920s and '30s during her tenure as Royal Historian. (The other late book was her Yankee in Oz of 1972.)

David Perry is a boy from Pennsylvania; on a visit to a circus, he wishes that a camel could talk — and is amazed when his wish is granted. (Only later does David learn that he possesses a magic wishing button, which powers the action of the story.) David nicknames the talking camel Humpty Bumpty; together the boy and camel embark on a whirlwind tour of strange lands, including Somewhere, Dwindlebury, and the flying island of Kapurta (which is the enchanted island of the title).

They meet a range of odd characters typical of the Oz literature — among them, Water Lily, Queen Else of Somewhere, and a dragon named Dismocolese. Eventually the two travelers make their way to the Emerald City in time for a birthday party for the Cowardly Lion.

The original edition of the book contains maps of the fantasy territories drawn by James E. Haff, and an afterword by Thompson's niece Dorothy Curtiss Maryott.

Thompson clearly liked camels, and enjoyed creating them as characters. She introduced the Comfortable Camel and the Doubtful Dromedary in her first Oz book, The Royal Book of Oz.

Retrieved from "https://oz.fandom.com/wiki/The_Enchanted_Island_of_Oz?oldid=13167"
Community content is available under CC-BY-SA unless otherwise noted.