"The Saw-Horse, finding himself alive, seemed even more astonished than Tip. He rolled his knotty eyes from side to side, taking a first wondering view of the world in which he had now so important an existence. Then he tried to look at himself; but he had, indeed, no neck to turn; so that in the endeavor to see his body he kept circling around and around, without catching even a glimpse of it. His legs were stiff and awkward, for there were no knee-joints in them; so that presently he bumped against Jack Pumpkinhead and sent that personage tumbling upon the moss that lined the roadside."
―The Marvelous Land of Oz (1904)

The Saw-Horse is literally a living sawhorse who lives in the magical Land of Oz. He is introduced in L. Frank Baum's second Oz book titled The Marvelous Land of Oz, published in 1904. He serves as a friend and getaway for the protagonist of the story named Tip, the slave boy of Witch Mombi and Jack Pumpkinhead, a sidekick main character who is the authentic invention created by Tip.

His body is a log with a notch cut in one end for a mouth, two knots for eyes and a branch for a tail. His legs are four straight tree limbs stuck into his body and spread wide apart for stability. When he was first made he had no ears, but that was soon corrected. His legs are shod with plates of gold, and he always wears Ozma's red leather saddle set with diamonds. He lives in a gold-paneled stable decorated with pearls and emeralds at the rear of the Royal Palace of Oz.

The Sawhorse can speak and follow directions, so it has never worn a bridle. It is a simple creature, and is one of the fastest creatures in Oz because he never gets tired.

Tip brought the Sawhorse to life with the Powder of Life to carry Jack Pumpkinhead, whose wooden joints were wearing out from walking. He accompanied Tip through his adventures with the Scarecrow until it was revealed that Tip was actually Princess Ozma, the rightful ruler of Oz.

As queen, Ozma had the Sawhorse's legs shod with gold the prevent them from wearing out. He remains her personal steed and she often rides him through the streets of the Emerald City and throughout the Land of Oz. (The Marvelous Land of Oz)

When Jim the Cab-horse visited the Land of Oz, the Sawhorse was honored to meet a Real Horse. They raced, and the Sawhorse won thanks to his untiring nature. (Dorothy and the Wizard in Oz)

In his modern Oz books, March Laumer gives the Sawhorse the name Lignum.

In the musical Wicked, the Sawhorse was a bike for Fiyero's arrival at Shiz.

He appeared in Marvel's The Marvelous Land of Oz.

In The Shirley Temple Show: The Land of Oz, the Sawhorse was voiced by Mel Blanc, in the 1981 Marvelous Land of Oz play it was voiced by James McNee.  The Sawhorse also appears in His Majesty the Scarecrow of Oz, and the animated productions W krainie czarnokieznika Oza, Ozu no Mahotsukai The Oz Kids and  Priklyucheniya v Izumrudnom Gorode.

Unused concept art for Oz the Great and Powerful exists for the Saw Horse.

Sawhorse in The Shirley Temple Show: The Land of Oz (1961) 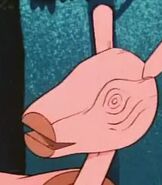 Sawhorse in the 1981 Marvelous Land of Oz play 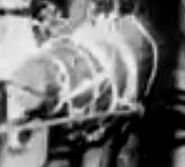 Sawhorse in His Majesty the Scarecrow of Oz (1914)

Sawhorse in The Oz Kids (1996)
Add a photo to this gallery
Retrieved from "https://oz.fandom.com/wiki/Sawhorse?oldid=73448"
Community content is available under CC-BY-SA unless otherwise noted.