"All across the meadows, many poppies blossomed, and that were so hypnotic and brilliant in color they nearly dazzled Dorothy's eyes. "Aren't they beautiful?" the girl asked her companions, as she breathed in the spicy scent of the big, bright flowers."
―The Wonderful Wizard of Oz (1900)

"They now came upon more and more of the big scarlet flowers until they found themselves in the midst of a great meadow carpeted with nothing but poppies. Now, in the magical Land of Oz, it is a well known fact that when there are many of these flowers together their odor and fragrance is so strong and so powerful, that anyone who breathes it in instantly begins to fall asleep, and if the sleeper is not carried away from the deadly scent of the blossoms, they sleep on and on forever and ever until their dying day. But Dorothy, just a little girl from Kansas, did not know this, nor could she get away from the bright red flowers that were everywhere about; so presently as she walked on her eyes grew very heavy, and soon she felt she must sit down to rest and to even sleep. "
―

The Poppies are introduced in L. Frank Baum's first Oz book titled The Wonderful Wizard of Oz, published in 1900 and appear in the eighth chapter of the novel The Deadly Poppy Field. In the tale, these dangerous poppies bloom within the magical Land of Oz and are used as an obstacle of which involves the main characters and protagonist in the plot of the story, Dorothy Gale, her pet dog named Toto, and their three Oz companions the Scarecrow, Tin Woodman and Cowardly Lion. Yet these scarlet blossoms are mysteriously cursed. They are attractive to the eye, soothing to the smell, and dangerously fatal when among too many.

The specific kind of poppy in Oz is a rare magical species type of flower which all happen to hold an extra strong Papaver somniferum within its core and scented petals which produces edible seeds. This is also the source of the crude drug "opium" which contains powerful medicinal alkaloids such as heroin and morphine.

Normal poppies are herbaceous annual, biennial or short-lived perennial plants. Some species are monocarpic, dying after flowering, but in Oz these poppies can never die or ever wilt. In Oz, once the poppies blossom, they live forever. And when any living being or creature is surrounded by the pretty smell, it is so powerful that anyone who breathes it in for too long, falls into a deep eternal slumber, from which they cannot wake and one could sleep on forever and ever amongst these plants until eventual death.

There is no way to break this dark spell and stop the deadly flowers unless one were to be physically carried and taken out of the field and far away enough, to breathe in the fresh air and come out of the deadly trance, weakening the poison that dwells in the meadow.

Not much information is given as to where these blood red poppies originated from and why they became enchanted with the curse of eternal sleep. However, these poppies are described by Baum as being more beautiful than any other poppy ever seen. They are big, bright, lively, luscious, and delicately scented. The meadow that is full of hundreds of thousands of them is vast and stretches out many, many miles in every direction at the borders of Munchkin Country.

In The Wonderful Wizard of Oz...

"They walked along listening to the singing of the brightly colored birds and looking at the lovely flowers which now became so thick that the ground was carpeted with them. "
―

During the long epic Journey to Emerald City to see the great and powerful Wizard, Dorothy nor her traveling comrades were ever warned beforehand about the curse held within the poppies. Thus, walking right into the scarlet field until they were knee deep in the flowery red carpet. And thinking this only as a lovely little short-cut, the group unknowingly walked right into a death trap. Dorothy Gale and her dog Toto succumbed to the slumbering scent of these pretty plants as they traveled with their new found friends to see the Wizard. After Dorothy and Toto fell victim, even the Cowardly Lion gave into the hypnosis and temptation of them and fell fast asleep shortly after Dorothy and Toto did. He tried to run out of the field and away to safety when he realized what the flowers were capable of, but was unsuccessful and the huge beast collapsed lifeless among the pretty poppies.

The Scarecrow and Tin Man were immune because they weren't made of flesh and blood, therefore they were not at all effected like their other three friends. Luckily because of this, they both were able to help their sleeping friends and they were rescued in time before they all died. Dorothy and Toto were light enough for the Strawman and Tinman to carry out of the poppy field; taken to safety at once and placed on a nearby meadow of rich green grass that helped the spell of the flowers wear off. The Lion however, (described as being nearly as large as a horse in size) was much too big and heavy to be carried out like the girl and her dog, so the Strawman and Tinman had to leave him behind to sleep on forever. All they could do was wish for their doomed friend to hopefully dream of finally finding his courage at last.

Just as it seemed all hope was lost, a mean and hungry Wildcat ran past who was ruthlessly chasing a poor little mouse to make as its snack. The Tin Woodman saw this and out of compassion for the mouse, chopped off the Wildcat's head clean off with his handy axe to save the mouse. The mouse politely introduced herself as the Queen of the Field Mice. And as a sincere thank you, she and her loyal mouse subjects helped successfully rescue the Cowardly Lion from the sleep-inducing poppies which allowed them to continue on their journey to see the Wizard.

As the travelers make their way out of the dark forest, Dorothy and her friends see the beautiful Emerald City far off in the distance, right before them. Excited, they all decide to run through a large poppy field to get to the city faster believing the field to be a shortcut. But when they get half way into the field they fall prey to the Wicked Witch of the West's clever trap.

"And now, my beauties, something with poison in it, I think. With poison in it, but attractive to the eye, and soothing to the smell. Poppies... Poppies. Poppies will put them to sleep. Sleeeeep. Now they'll sleeeeeeeep!"
―

The Wicked Witch had used a dark spell to secretly enchant these seemingly normal poppies in order to stop Dorothy, all so she could retrieve her sister's magic Ruby Slippers that Dorothy had been wearing upon her arrival in Oz, as protection. The Wicked Witch wanted the shoes to become the most powerful figure in all of Oz and avenge her sister's death. It was a partial success and Dorothy helplessly collapsed in the meadow and she laid sound asleep next to her dog Toto, who was already fast asleep, which caused the Tin Woodman to cry, but the Scarecrow told him not to, as he'll rust himself again, while the Cowardly Lion soon passed out as well. However, since Scarecrow and Tin Woodman were not made of living organisms, the poppies had no effect on them. Realizing they had fallen into the Wicked Witch's trap, they frantically shouted for help.

Luckily, Glinda the Good Witch heard their plea and gladly helped them by using her magic wand to make it magically snow, causing the effects of the enchanted poppies to be neutralized, although it also re-rusted the Tin Man, but he had also rusted himself crying. Much to the Wicked Witch's dismay, this allowed Dorothy, Toto and Lion to awaken and (after re-oiling the Tin Man back to normal) continue the journey to see the Wizard unharmed.

In the modern and urban African-American version of Baum's story, The Wiz both the original Broadway show and 1978 film, the poppies were controversially represented as a group of foxy ethnic seductresses with

sassy attitudes  In the play, they seduce the Cowardly Lion, but he is later saved by a field mouse. In the movie they are hinted to be prostitutes, dressed in flashy red revealing outfits and walked the city streets of Oz putting people in an erotic, sensual trance. They seduced anyone who came near them by blowing magic opium glitter into the faces of their potential victim which would put them in a drugged induced state, most likely all their clients. This also happened as the Cowardly Lion and Dorothy got too close to the poppy girls, as it is later revealed they worked for the Wicked Witch named Evillene.

In the 2015 TV special, the poppies are portrayed as beautiful women in flower costumes, who try to seduce people into working their field until winter. When Dorothy and her friends pass through the poppy field, the Cowardly Lion saves the team by using reverse pychology on the women then finally ties the women with a vine.

In Donald Abbott's 1991 novel How the Wizard Came to Oz, the poppies are created by Glinda originally to stop the Wicked Witch of the East from invading the Emerald City.

In this 2005 made for TV Muppets movie by Disney, Oz's poppy field is reinvented into a hip night club that closely resembles a Hookah-Bar that plays soothing jazz music. The  music can hypnotize people into never leaving by putting them into eternal sleep.

Oz the Great and Powerful 2013

In Disney's prequel movie Oz the Great and Powerful, Glinda the Good cast a spell upon the poppy meadow with her magic wand to disguise the scarecrow army in a clever illusion by covering them all in fog.

This made it difficult for anyone to see that the fog covered army approaching Emerald City was nothing more than stuffed scarecrows. This trick illusion was used to specifically mislead and outsmart the two Wicked Witches as they sent their flying Baboons to attack Glinda's people. Since the poppies are poison, the Baboons fell asleep in the field before they could retreat. The trick was successful as it weakened the Wicked Witches Winged Army in the battle for Oz's Royal Throne.

In ABC's hit TV show, Once Upon a Time, Emma Swan, the show's protagonist, is given poppy powder from another kingdom- presumably the Land of Oz - which can put even a giant to sleep instantly.

the Papay 'Runners' is based on deadly poppies They are scouts and hunt for food. The Papay used to be peaceful creatures who were farmers of the groves. After Azkadellia overthrew the Queen and cursed the land causing drought and all the trees died. This forced the Papay to become hunters.  Wyatt Cain, DG and Glitch pass through the fields on the way to Central City and rescue Raw.  Before entering the fields, Wyatt tells Glitch and DG that he's see Papay gnaw through someone within 30 seconds.  During the course of the quest they pass through the fields twice.

Scarecrow and Tin Woodman carry a sleeping Dorothy and Toto out of the poppy feild. By W. W. Denslow 1900.

Dorothy, Toto and Lion asleep amongst the poppies. 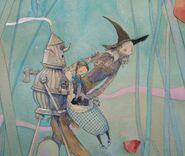 Sleeping in the Poppy field.

the Deadly Poppy Field of Oz. 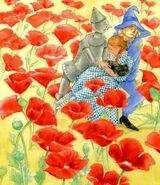 Poppies of Oz will kill you... 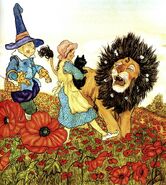 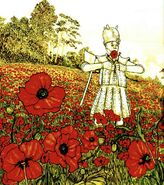 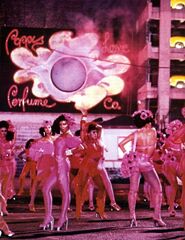 The Papay in tin man is based on deadly poppies
Community content is available under CC-BY-SA unless otherwise noted.
Advertisement