Oz Wiki
Register
Don't have an account?
Sign In
in: Pages with reference errors, Adaptations, Films,
and 2 more

Oz the Great and Powerful 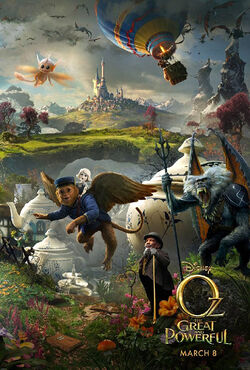 Oz the Great and Powerful is a 2013 fantasy film that is intended to be a prequel to the 1939 film The Wizard of Oz, however this is not made clear in the film, due to copyright matters. It is directed by Sam Raimi, with a script written by Mitchell Kapner and David Lindsay-Abaire.

The story takes place about 20-30 years before Dorothy's story.

In 1905, Oscar Diggs, a small-time circus magician with dubious ethics, is hurled away in a tornado from dusty Kansas to the vibrant Land of Oz. He thinks he’s hit the jackpot — fame and fortune are his for the taking — that is until he meets three witches, Theodora, Evanora and Glinda, who are not convinced he is the great wizard everyone’s been expecting. Reluctantly drawn into the epic problems facing the Land of Oz and its inhabitants, Oscar must figure out who is good and who is evil, before it is too late. Putting his magical arts to use through illusion, ingenuity, and even a bit of wizardry, Oscar transforms himself not only into the great and powerful Wizard of Oz, but also into a much better man as well.[1]

Differences from the Books

Oz the Great and Powerful/Gallery

Community content is available under CC-BY-SA unless otherwise noted.