Ojo is a Munchkin who has had many adventures in the Land of Oz.

Ojo is a typical Munchkin boy. He wears blue knee pants with gold buckles and blue silk stockings, a blue ruffled waist and a jacket of bright blue braided with gold. His blue leather shoes turn up at the pointed toes, and his hat has a peaked crown and a flat brim with a row of tiny bells.

Ojo was known as "Ojo the Unlucky" in part because he had lived with his silent uncle and seen none of the world, and also because he was born on Friday the 13th, is left-handed, and has a wart under his arm. The Tin Woodman officially deemed him Ojo the Lucky because he believed Ojo's bad luck was due to a self-fulfilling prophecy.

Ojo was born to Isomere and Ree Alla Bad, who was the son of the king of Seebania, a small kingdom within the Munchkin Country. But when Mooj disposed of the King and forcibly exiled Ree Alla Bad, Ojo's great uncle Stephen escaped with the child and took him to a little hut in the Blue Forest. Stephen became known as Unc Nunkie to Ojo. (Ojo in Oz)

Life in the Blue Forest

Ojo lived for a long time with Unc Nunkie in the Blue Forest, a remote location in the south of the Munchkin Country. When the bread tree behind their house stopped producing, they traveled to visit his uncle's friend Dr. Pipt and his wife, Margolotte.

Ojo is largely responsible for the mixture of brains given to the Patchwork Girl. When she was brought to life, an accident spilled the Liquid of Petrifaction on Unc Nunkie. Ojo set out with the Patchwork Girl and the Glass Cat to find the ingredients for the antidote. They encountered the Woozy, whose tail held the hairs needed as ingredients in the antidote. The Shaggy Man rescued them from Man-Eating Plants and escorted them to the Emerald City.

Another of the ingredients needed for the antidote was a Six-leaved Clover. Although he had been warned that picking them is against the law, he found one and picked it and was promptly arrested at the gate of the Emerald City by the Soldier with the Green Whiskers. He was the first lawbreaker that anyone could remember, and he spent the night in the elegant prison with Tollydiggle the jailer. The next morning he was brought before Princess Ozma who forgave him.

He set out to continue his quest with Dorothy Gale, the Scarecrow, and the Patchwork Girl. In the Quadling Country they resolved a war between the Hoppers and Horners and got another ingredient, water from a dark well.

They next traveled to the Winkie Country where the Tin Woodman provided Ojo with his fourth ingredient, a drop of oil from a live man's body. However, he refused to let him have the final ingredient, the left wing of a yellow butterfly. Having failed at his mission, Ojo returned to the Emerald City where the Wizard of Oz was able to reverse the effects of the Liquid of Petrifaction and bring Unc Nunkie back to life.

Ojo and his uncle were given a nice house just outside the walls of the Emerald City. (The Patchwork Girl of Oz)

Life near the Emerald City

When Ozma was kidnapped and Glinda's and the Wizard's magic was stolen, Glinda created search parties to search Oz for the stolen items. Ojo took a party with Unc Nunkie and Dr. Pipt into the Munchkin Country, as it was the country they were most familiar with. However, ultimately it was Dorothy's party that discovered Ugu the Shoemaker, who was the one responsible, in the Winkie Country. (The Lost Princess of Oz)

Ojo was among the guests attending Ozma's birthday party in the Emerald City. (The Magic of Oz)

When Mooj discovered that Ojo was living near the Emerald City, he put out a bounty on the boy's head. A group of gypsies tricked him into approaching, and then they captured him. As he was taken away on their wagon, he met Snufferbux, a bear who had also been imprisoned by the Gypsies. He was soon captured again by a group of bandits when they raided the Gypsy caravan.

The leader of the bandits was Realbad, to whom Ojo quickly took a liking, even though Realbad intended to turn him in for the reward. When Realbad's men plotted against him, Ojo blew a magic whistle which took him, Snuffer, and Realbad to a mountaintop somewhere nearby. The three of them had uneasy adventures together, as Snuffer hoped to escape with the boy to prevent him from being brought to Moojer Mountain for the bounty. And Realbad, friendly though he was, still intended to collect the bounty.

Snuffer and Ojo finally did escape from Realbad, only to accidentally wander to Moojer Mountain themselves, where Mooj captured Ojo. When Realbad arrived, they burst in, only to discover Mooj had disappeared. Ozma and the Wizard of Oz arrived, and they pursued Mooj and defeated him. Realbad became the King and Isomere the Queen, and Ojo, Unc Nunkie, and Snuffer moved into the castle with them. (Ojo in Oz)

Because author Jack Snow chose to disregard Ruth Plumly Thompson’s Oz books, he has Ojo and Unc Nunkie still living in the Emerald City in The Magical Mimics in Oz. For all we know, perhaps they moved back to be near Ojo’s new friends.

Ojo appears as the leader of the Munchkins in "Emerald City". He's one of the first people to meet Dorothy and initially wants to kill her; he's loyal to the Wicked Witch of the East, as she's probably the only one who can release his wife from imprisonment.

Ojo is a regular cast member in the TV series "Lost in Oz". He's an oversized munchkin with large blue hair, and he's part of a trio of friends and adventurers with Dorothy and West.

Dorothy and the Wizard of Oz

He is the focus of Ojo's Treasure Hunt

Ojo made brief appearances in the rest of Baum's Oz books, although not nearly as frequently as did Scraps. In fact, we don't see Ojo hanging around with Scraps much at all in later books despite their close friendship in the first book they appear in, though Baum mentioned that Ojo had struck up a friendship with Button-Bright. Ojo and Button-Bright's friendship is something future authors would explore. Ojo later starred in his own book, Ojo in Oz by Ruth Plumly Thompson. There, he demonstrated his ability to walk on his hands and turn cartwheels. Thompson made Ojo the crown prince of Seebania in her novel, though later writers tend to ignore this promotion in status; a big reason for this being that Ojo in Oz is one of the few original Oz books that is still protected by copyright. 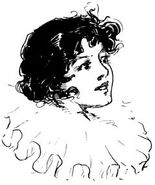 Ojo reunited with Unc Nunkie
Add a photo to this gallery
Retrieved from "https://oz.fandom.com/wiki/Ojo?oldid=73616"
Community content is available under CC-BY-SA unless otherwise noted.