Hamilton's film career began in 1933, when she recreated her Broadway role in the movie version of Another Language. By the time she was cast as the Wicked Witch, she had already made 25 films. (Hamilton worked more than many actors in her day, because she freelanced instead of signing a studio contract, and cleverly kept her salary below $1000 per week.)[1] She had previously played the Witch onstage, in two community theater productions.

On December 23, 1938, while filming the Wicked Witch's exit from Munchkinland in a blaze of fire, Hamilton suffered first-degree burns on the right side of her face and second-degree burns on her right hand; the flames rose too soon, before she had descended below the stage. Hamilton's green makeup was copper-based and potentially toxic, and had to be removed from her burned flesh with alcohol, an intensely painful process. She wasn't able to return to the movie until February 10. When she did return, she wore green gloves, since her hand was not yet fully healed.[2]

Hamilton's infamous Witch's laugh blew out sound equipment circuits. For several weeks after she completed work on her role, Hamilton's complexion retained a green tinge from the Witch's makeup.

When the film was previewed for test audiences in June 1939, Hamilton's performance as the Witch was perceived as too frightening. In a letter dated 16 July, L. Frank Baum's granddaughter Florence wrote to Ruth Plumly Thompson about a preview three weeks earlier: "It was very good, although the Witch was so terrifying that some small children had to be taken out." The final edit of the film removed a least a dozen lines of the Witch's dialogue to tone down her effect.[3]

Margaret Hamilton had previously played with Oz castmate Frank Morgan in By Your Leave and There's Always Tomorrow (both 1934) and Saratoga (1937). She would appear with Judy Garland again in Babes in Arms (1939), with Jack Haley in George White's Scandals (1945), and with Ray Bolger in The Daydreamer (1966). And she appeared with Clara Blandick in three films from 1934 to 1950.

In the finished film, Hamilton's Wicked Witch has twelve minutes of screen time. Hamilton worked on the production for four months, and earned precisely $18,541.68.[4]

Prior to her acting career, Hamilton had worked as a kindergarden teacher. She made efforts to stay true to her roots by promoting elementary education throughout her life. In 1948 she was elected to a school board in Beverly Hills, California. In the 1970's she donated considerable amounts of money to Public Broadcasting Service, in particular the Children's Television Workshop, in an effort to promote early learning.

Hamilton provided the voice for Aunt Em in the 1974 animated film Journey Back to Oz.

in 1975 Hamilton appeared on the PBS series Mister Rogers' Neighborhood.

Hamilton appeared in an episode of Sesame Street which aired February 10, 1976, reprising her role as the Wicked Witch of the West from The Wizard of Oz (1939). Reportedly, her performance scared so many children that their parents wrote in to CTW, saying their kids were too scared to watch the show anymore. As a result of the overwhelming reaction, this episode never re-aired.  Sesame Workshop  (successor to CTW) still has the episode in it's archives and seven minutes of the episode was shown in 2019.

Hamilton appeared in the Paul Lynde Halloween Special which aired October 29, 1976.  She appeared as both herself and the Wicked Witch of the West. Also present was Billie Hayes as her "sister" Witchiepoo, from the series H.R. Pufnstuf.

In the 1970's she appeared in several PSA commercial and provided the role of Cora the store clerk that only sells Maxwell House Coffee.

Hamilton died in her sleep on May 16, 1985 from a heart attack in a nursing home in Salsbury, Connecticut at the age of 82. 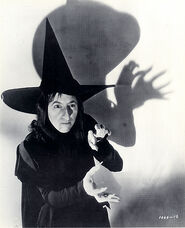 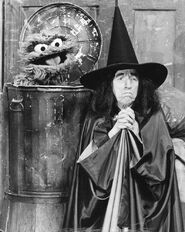 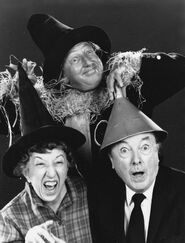 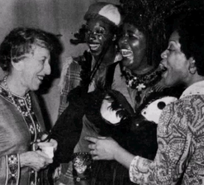 Margret Meeting Hinton Battle, Mabel King and cast member after a showing of The Wiz 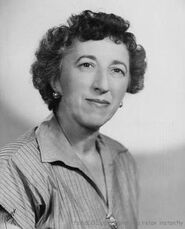 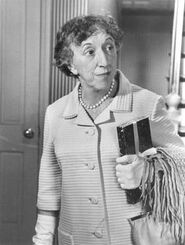 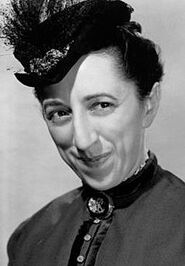 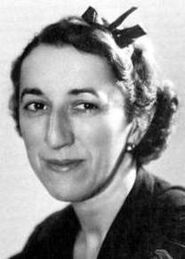 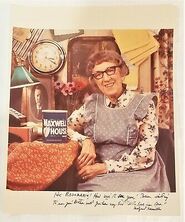 Retrieved from "https://oz.fandom.com/wiki/Margaret_Hamilton?oldid=75327"
Community content is available under CC-BY-SA unless otherwise noted.