Maps of Oz have been produced almost since the beginning of Oz literature. Along the way they have embodied one of the many inconsistencies that seem almost characteristic of Oz.

Any map of the subject must be rooted in the description of the Land of Oz given by L. Frank Baum in the first Oz book, The Wonderful Wizard of Oz, which details the four separate countries of Oz in the four cardinal directions, with their names and characteristic colors. (The term "Gillikin" is not introduced until the opening chapter of the second Oz book, The Marvelous Land of Oz.) The earliest known map of Oz is one that Baum had made as a magic lantern slide for his Fairylogue and Radio-Plays in 1908. It shows the four countries with their proper colors, located in their proper places — Gillikins up, Quadlings down, Munchkins to the East on the right, Winkies to the West on the left.

The first printed map of Oz, what Baum biographer Katharine M. Rogers has called the "first official map," was published in the eighth Oz book, Tik-Tok of Oz (1914); and it creates a problem.

This reversal of direction continues in a later Oz book. In The Lost Princess of Oz, Chapter 4, Baum writes that the eastern portion of the Winkie Country "lies nearest to the Emerald City," which places the Winkie Country west of the capital; yet the accompanying map shows it to the right of the Emerald City. Confusingly, in Chapter 14, the Frogman tells a Winkie woman that the land of the Yips is "on a high mountain at the southeast of your country." This would seem to be in keeping with the map in that volume, which shows the Yips in the lower right corner (conventionally the southeast, although this map lacks a compass rose). By the orientation described in The Wonderful Wizard of Oz, the Winkie Country would have no southeast corner.

How could this confusion of East and West have occurred? There are several theories. Baum had already dreamed up a flag of Oz; on a flag, the up and down directions are generally consistent, but the right and left sides reverse depending on how the flag is viewed. A flag on a flagpole is just as visible from its reverse side as its obverse. Alternatively, as Michael Patrick Hearn suggests in The Annotated Wizard of Oz [p. 41], Baum may have hastily referred to the magic-lantern slide he had made for the Fairylogue and Radio-Plays, and viewed the slide from the wrong side, which would similarly reverse the right and left sides of the image. Finally, Oz fan and scholar David Maxine argues that Baum intended the directions of Oz to be reversed from those of the normal world, perhaps indicating that in Oz (and other fairy countries) a person facing north would see the sun rise on their left and set on their right.[2]

However, in 1920, publisher Reilly & Lee reprinted this map, but replaced the reversed compass rose with a standard one, with east to the right and west to the left.[3]

The result of this confusion is that post-1920 maps of Oz often place the Munchkin Country in the West and the Winkie Country in the East, though this violates the clear details of the first book.

In the 1920s and '30s, Baum's successor Ruth Plumly Thompson wondered why publisher Reilly & Lee did not create an updated map of Oz, one that showed the many fantasy locations in her books. That map had to wait a long time: James E. Haff and Dick Martin created such an updated map in 1960, featuring locales not only from Thompson's books but from those of later "Royal Historians" too. This map corrects the positioning of the Munchkin and Winkie Countries, however doing so creates its own inconsistencies with earlier maps (for instance, the Blue Forest and Ojo's home went from being in southern Munchkin Country near the border with Quadling Country to northern Munchkin Country bordering Gillikin Country, contradicting the books). Haff and Martin's accompanying map of "The Magical Countries surrounding Oz" shows the entire region of Nonestica and the Nonestic Ocean; again the correcting of the directions violates a detail from Ozma of Oz in which Ozma's party crosses the Deadly Desert from Ev into Munchkin Country, now on the opposite side of the continent in the updated map (although this particular error dates back to the map from Tik-Tok of Oz too). Both maps were included in the Del Rey and Books of Wonder reprints of the Oz books. 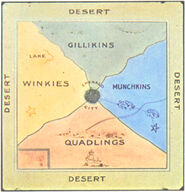 The Fairylogue and Radio-Plays

1932 map made to promote The Wonderland of Oz.

1987 version for The International Wizard of Oz Club by James E. Haff and Dick Martin.

The Lost Princess of Oz

Magic Land (The Wizard of the Emerald City) 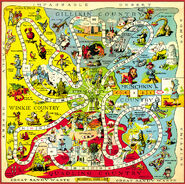 Ozoplaning with the Wizard of Oz 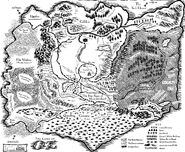 Wicked: The Life and Times of the Wicked Witch of the West

Son of a Witch

Munchkinland and surrounding area. (A Lion Among Men) 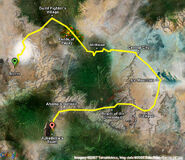 The Land of Oz.
Wicked: The Untold Story of the Witches of Oz

The Land of Oz
Oz the Great and Powerful 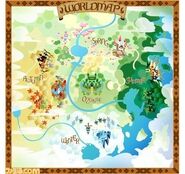 The Wizard of Oz: Beyond the Yellow Brick Road