"May I ask your name?" Said Tip, as he trotted along. "I am General Jinjur," was the brief reply. "Oh!" said the boy surprised. "What sort of a General?" "I command the Army of Revolt in this war," answered the General, with unnecessary sharpness. "Oh!" he again exclaimed. "I didn't know there was a war." "You were not supposed to know it," she returned, "for we have kept it a secret; and considering that our army is composed entirely of girls," she added, with some pride, "it is surely a remarkable thing that our Revolt is not yet discovered." "It is, indeed," acknowledged Tip. "But where is your army?" "About a mile from here," said General Jinjur. "The forces have assembled from all parts of the Land of Oz, at my express command. For this is the day we are to conquer His Majesty the Scarecrow, and dispose him from the throne. My Army of Revolt only awaits my coming to march upon the Emerald City, then we will attack as planned! "
―The Marvelous Land of Oz (1904)

Jinjur is a Munchkin girl and female General who once led an Army of Revolt and briefly ruled the Emerald City of Oz. She is introduced in L. Frank Baum's second Oz book ttitled The Marvelous Land of Oz, published in 1904.

"Friends, fellow-citizens, and girls!" she said; "we are about to begin our great Revolt against the men of Oz! We march to conquer the Emerald City -- to dethrone the Scarecrow King -- to acquire thousands of gorgeous gems -- to rifle the royal treasury -- and to obtain power over our former oppressors! "
―The Marvelous Land of Oz (1904)

General Jinjur is a pretty girl who is a naturally power hungry feminist, with short blonde hair and blue eyes. She is of average height despite being a native Munchkin and for the most part her personality is a very tough one. She never gives up without a good fight and is a good, reliable, and honest General. She can get overly excited and a little rash at times.

Jinjur was unhappy because men had ruled the Emerald City for too long. She secretly organized an army made up entirely of girls, and successfully conquered the city, stealing its fabulous wealth and enslaving all the men and boys. Jinjur was made a queen, but knowing that the Scarecrow had escaped and joined forces with his old friend the Tin Woodman, she summoned an old witch named Mombi to help her maintain the kingdom. Mombi was eventually captured by Glinda, the Good Witch of South and was forced to reveal the identity of Princess Ozma, the true ruler of Oz. The Emerald City was liberated and Jinjur was captured, but on a promise of good behavior, she was sent home to her mother, like all the girls of her army. (The Marvelous Land of Oz)

After this she settled down on a farm, obeying her promise to Ozma to behave. She married and lives on a farm in the Munchkin Country with her husband and nine cows. Although it is obvious that she "wears the pants" in the marriage. (Ozma of Oz). She later attempted to help the Scarecrow and the Tin Woodman break a terrible enchantment, and permitted them to stay at her farm. (The Tin Woodman of Oz)

Writer L. Frank Baum intended the women's revolt to be a fun parody of the suffragettes, a movement with which he was a big supporter of himself. His mother-in-law was an active campaigner of the Suffrage Movement.

Jinjur is the subject of the Oz short story "Four Views of General Jinjur" and "Jinjur's Journal" (from Oziana 2005).

Jinjur and her girls raid the Emerald City!

Caroline Berner as Jinjur in The Wonderful Land of Oz (1969) 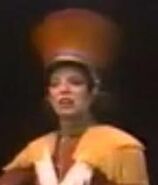 Julee Cruise in the 1981 The Marvelous Land of Oz play 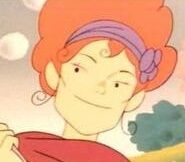 Jinjur in the Marvel Comic Oz series by Skottie Young

Jinjur in Return to Oz

Jinjur by John R. Neill
Add a photo to this gallery

Retrieved from "https://oz.fandom.com/wiki/Jinjur?oldid=66199"
Community content is available under CC-BY-SA unless otherwise noted.