"I'm not a melon, a pumpkin if you please. My name is Jack...Jack Pumpkinhead. My mother built me to scare that awful Witch Mombi, she stood me in a place where Mombi would meet me face to face. And along she came, sure enough she was scared, but then she became angry, she has a terrible temper! Anyway, Mombi was about to destroy me with her stick. But then she decided to test some Powder of Life, she'd just bought from some Magician. Well, she did, and it worked; and here...I...am... "
―Jack Pumpkinhead in Return to Oz (1985)

Jack Pumpkinhead is a fictional character created by L. Frank Baum. He is introduced in Baum's second Oz book titled The Marvelous Land of Oz, published in 1904. He makes his debut appearance in the first chapter of the story titled Tip Manufactures A Pumpkinhead. Jack is a famous personage from the magical Land of Oz and comes from Oz's northern quadrant called Gillikin Country. He also is the non-biological "son" of Princess Ozma, the child Queen of Oz. Ozma made Jack when she was still disguised as a boy called Tippetarius aka Tip--the "kitchen slave" who belonged to the old wannabe Wicked Witch named Mombi.

Jack Pumpkinhead also was the inspiration of Tim Burton's iconic character known as "Jack Skellington, the Pumpkin King" from Disney's A Nightmare Before Christmas.

"Mombi's curious magic often frightened her neighbors, and they treated her shyly, yet respectfully, because of her weird powers. But Tip frankly hated her, and took no pains to hide his feelings. Indeed, he sometimes showed less respect for the old woman than he should have done, considering she was his guardian. There were pumpkins in Mombi's corn-fields, lying golden red among the rows of green stalks; and these had been planted and carefully tended that the four-horned cow might eat of them in the winter time. But one day, after the corn had all been cut and stacked, and Tip was carrying the pumpkins to the stable, he took a notion to make a "Jack Lantern" and try to give the old woman a fright with it. So he selected a fine, big pumpkin -- one with a lustrous, orange-red color -- and began carving it. With the point of his knife he made two round eyes, a three-cornered nose, and a mouth shaped like a new moon. The face, when completed, could not have been considered strictly beautiful; but it wore a smile so big and broad, and was so Jolly in expression, that even Tip laughed as he looked admiringly at his work. "
―The Marvelous Land of Oz (1904)

"I must give him a name!" he cried. "So good a man as this must surely have a name. I believe," he added, after a moment's thought, "I will name the fellow...Jack Pumpkinhead! "
―

Jack's head is a very large carved pumpkin that resembles the wickedly jolly expression of a traditional Halloween pumpkin. His tall figure is made entirely from bark and dead tree limbs of solid hickory and jointed with wooden pegs. His neck is a sharp stick upon which his pumpkin head is placed. His first set of clothing consisted of purple trousers, a red shirt, a pink vest with white polka dots, stockings, and shoes. He has other outfits, all with the same lack of color coordination.

Jack is not known for his intelligence which seems to depend on the quality and number of the seeds in his pumpkin-head at that time. However he does manage to come up with random bits of wisdom and common sense. He is also shown to be quite skilled at making vegetable-themed houses.

Jack was made by a little orphan boy named Tip as a prank to scare his mean spirited guardian, an old wannabe Wicked Witch named Mombi. However, instead of being frightened, Mombi used Jack to test her new Powder of Life that she had recently bought from some Magician who lived nearby. Mombi sprinkled the powder all over Jack and after saying the magic words the powder worked and Jack instantly came to life.

When Tip decided to run away from Mombi for good, he took Jack with him and headed south for the Emerald City. After many adventures with the Scarecrow, Tin Woodman, the Wogglebug, the Sawhorse, and the Gump, it was eventually revealed by Glinda the Good Witch and Mombi that Tip was actually Princess Ozma. Ozma was the long-lost daughter of Oz's old King named Pastoria who once ruled the land in a tiny kingdom before the Wizard eventually arrived and proclaimed himself as Oz's dominate ruler.

Later, Jack finally settled in a cozy pumpkin house in the middle of a pumpkin field in Oz's western quadrant called Winkie Country. Here, he spends much of his time growing a patch of healthy pumpkins in his yard to replace his old heads, which eventually spoil and need to be changed every so often. Apparently, Princess Ozma herself gladly carves new heads for Jack when it is necessary. The old heads are buried in a graveyard on his property. (The Road to Oz) Jack also designed a five story, jewel-encrusted, corn-shaped mansion for the Scarecrow. (The Emerald City of Oz)

Once, Princess Ozma sent Jack with the Sawhorse to rescue a pair of lost children from the woods at the west of Oz. His pumpkin head was smashed as a result of a run-in with the Squirrel King, but the Wizard of Oz came to his rescue. ("Jack Pumpkinhead and the Sawhorse")

Peter Brown, (a little boy baseball pitcher from Philadelphia) while reminiscing about his previous visit to Oz, suddenly found himself landing right into Jack Pumpkinhead's front yard in the Winkie Country. Peter and Jack set off together for the Emerald City, but took a wrong turn and ended up traveling through the Quadling Country. (Jack Pumpkinhead of Oz)

Jack had to wait until the 23rd Oz book to get a book named after himself along with the starring role. Jack Pumpkinhead of Oz was written by Ruth Plumly Thompson, the writer who continued the Oz books after the death of L. Frank Baum.

Jack appears in the animated movie sequel Journey Back to Oz (which had a different outcome for the character) where he was voiced by Paul Lynde.

In The Wonderful Land of Oz Jack was played by George Wordsworth.

In Dorothy in the Land of Oz Jack was voiced by Robert Ridgely.

Jack appears in Return to Oz where he was performed and voiced by Brian Henson.

In The Shirley Temple  Show: The Land of Oz Jack was voiced by Sterling Holloway (who was also the original voice for Disney's Winnie the Pooh).

Jack also makes a brief cameo during the opening of Dorothy and the Witches of Oz. 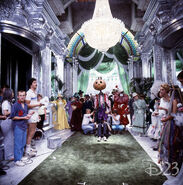 Behind the scenes of Return to Oz. 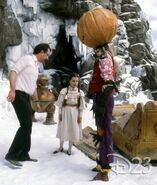 Walter Murch with Fairuza and Jack.

The home of Jack Pumpkinhead. 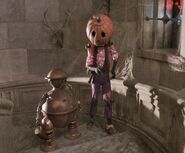 Jack Pimpkinhead with Tik-Tok in Return to Oz, 1985.

The Shirley Temple Show: The Land of Oz

The Wonderful Land of Oz

Journey Back to Oz

Dorothy in the Land of Oz 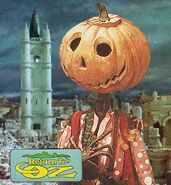 Jack with the Frog-Man.

Priklyucheniya v izumrudnom gorode
Add a photo to this gallery
Retrieved from "https://oz.fandom.com/wiki/Jack_Pumpkinhead?oldid=73708"
Community content is available under CC-BY-SA unless otherwise noted.