Guardian of the Gates

"Before them stood a little man about the same size as the Munchkins. He was clothed in a rich costume of all green silk and velvet from his head to his feet, and even his skin was of a greenish tint. At his side was a large green box encrusted with countless of dazzling emeralds. When he saw Dorothy and her companions the man asked, "What do you wish in the Emerald City?" "We came here to see the Great and Powerful Oz," said Dorothy. The man was so surprised at this answer that he sat down to think it over. "It has been many, many years since anyone asked me to see Oz," he said, shaking his head in perplexity. "He is a fierce and terrible Wizard indeed, and if you come on an idle or foolish errand to bother the wise reflections of the Great Oz, he might be angry and destroy you all in an instant!"
―The Wonderful Wizard of Oz (1900)

The Guardian of the Gates is a fictional character who lives in the magical Land of Oz. He is a very jolly and friendly little man who guards the emerald studded gates of Oz's imperial capital known as the Emerald City. He appears in L. Frank Baum's first Oz book titled The Wonderful Wizard of Oz, published in 1900. He is introduced in the tenth chapter of the novel titled The Guardian of the Gates.

It is explained in the book that absolutely no one in Oz who visits Oz's capital city can pass into the streets of the city without the Guardian of the Gates adorning the devices of green tinted spectacles on them first. These glasses are locked tightly on the wearer to protect their eyes from being blinded by all the beautiful sparkling emeralds which decorate the entire city. No one can take the glasses off unless they use the big gaint golden key that only the Guardian has a copy of. It is said that he always wears it on a thick gold chain around his neck and never takes it off.

"...the Wizard rules the Emerald City wisely and well. But to those who are not honest, or who approach him from curiosity, he is most terrible, and few have ever dared ask to see his face. I am the Guardian of the Gates, and since you demand to see the Great Oz I must take you to his Palace. But first you must put on the spectacles." "Why?" asked Dorothy. "Because if you did not wear spectacles the brightness and glory of the Emerald City would blind you. Even those who live in the City must wear spectacles night and day. They are all locked on, for Oz so ordered it when the City was first built, and I have the only key that will unlock them. "
―The Wonderful Wizard of Oz (1900)

In Baum's original book he is described as rather short, being the same height as a Munchkin, even though it does not clarify if he is of Munchkin blood or a native Munchkin who came from the eastern quadrant known as the Munchkin Country. In appearance he is said to be a older man but very jolly and round, with a chubby fat face that seems remarkably good-natured and is always smiling. He always wears all green garments and clothes of silk, satin and velvet with real emeralds embroidered into the hems for buttons. He also is usually seen to wear a high peaked green hat of velvet with gold trim and green peacock feathers. He always has large green glass spectacles on that are locked with two bands that reach to the back of his head and can only be taken off with a gaint sized solid gold key that he wears around his neck on a thick gold chain with a number of many other golden keys. Even his slightly wrinkled skin is said to be of a light greenish tint.

During the long reign of the Great Oz, it was the Guardian's duty to ensure that everyone (including animals and creatures) who entered the city was fitted with green spectacles, ostensibly to protect their eyes from the brightness and glory of the city. The green glasses were locked in place with a key on a chain worn around the Guardian's neck. (The Wonderful Wizard of Oz)

Later, after the city was conquered by General Jinjur and her Army of Revolt, the use the green spectacles was forgotten, but the Guardian continued to keep watch at the gates. (The Marvelous Land of Oz)

When the Patchwork Girl arrived in the Emerald City for the first time, the Guardian of the Gates composed a song on his mouth organ for her called "The Speckled Alligator". (The Patchwork Girl of Oz)

The Guardian was invited to a party by the Wizard celebrating Dorothy's original adventure in Oz, as he had a small part in that adventure. However, he refused to attend, saying he hadn't abandoned his post in 40 years and he wouldn't do so now. (Ozoplaning with the Wizard of Oz)

Jack Snow regarded the Guardian of the Gates and Captain Omby Amby as a single individual, even though L. Frank Baum and Ruth Plumly Thompson treated them as separate characters, as have most subsequent authors. He made this character the husband of Tollydiggle in The Magical Mimics in Oz. The joining of the two characters was repeated in Who's Who in Oz.

In Magic Land the Guardian is named Faramant. He hardly ever removes his glasses, faithful to the edict to the extent of refusing to do so even during a temporary edict which allowed people to do so.

In the classic MGM movie , the Guardian of the Gates is referred to as the Doorman. There is also another Doorman who guards the doors to the Wizard's room. Both roles portrayed by Frank Morgan.

In Walt Disney's 1985 Cult Classic film Return to Oz. The Guardian of the Gates can be seen in the Emerald City towards the end of the film in the Coronation scene.

In the musical The Wiz, the gatekeeper is not so jolly like in the book. He calls Dorothy and her friends, "trash" unworthy of entering the "Big Green Apple". The insulted Tin Man threatens to chop down the gate, scaring the gatekeeper into letting them inside. He also seems to love money and riches, as demonstrated when he lists bribing him as one way of gaining access to the Emerald City. When the Wiz forbids Dorothy and her companions from re-entering the City, Scarecrow exploits this greed to trick the gatekeeper into stepping out of their way, by claiming to have hidden a bag of Evillene's riches around the corner.

In the movie The Wiz, the Emerald City has two men guarding its entrance. They don't speak as often as the gatekeeper from the play did. They let Dorothy and her friends into the City once one of them sees the Silver Shoes on Dorothy's feet. The group doesn't meet the guards again on their second trip, when they go through the service entrance instead of the main door. The closest either of them gets to a third appearance occurs when Dorothy sings "Home", and the main gatekeepr's image floats past her.

In The Wiz Live!, the gatekeeper is played by rapper Common. He is more like a Bouncer for a club. He asks Dorothy and her friends to step to the back of the line, even though no one else is around. After they do so, he admits failing to find their names on his list. He only lets them in after Dorothy boasts that she knows Addapearle the Good Witch of the North, who rewarded her with the Silver Shoes after she killed Evamene the Wicked Witch of the East. This production also restored the scene from the original show where Dorothy and her friends have to go through him again on their second visit. 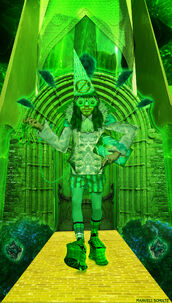 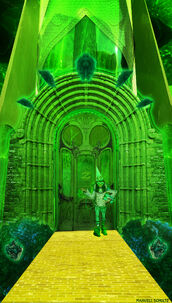 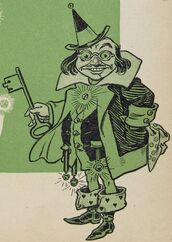 Guardian of the Gates by W. W. Denslow.

Guardian of the Gates in Return to Oz. 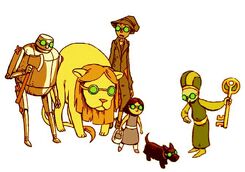 Guardian of the Gates by Evan Dahm. 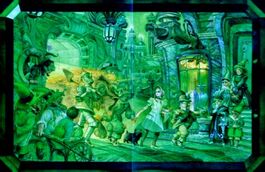 Guardian of the Gates by Charles Santore. 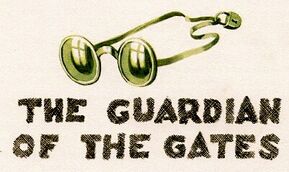 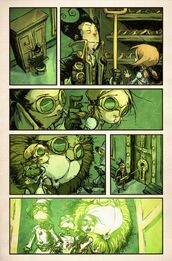 The Guardian of the Gates in the Marvel Comic Oz series. 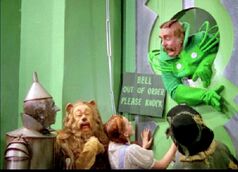 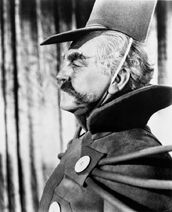 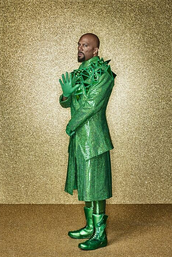 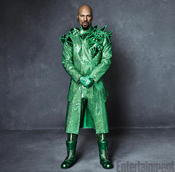 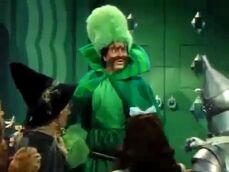