Wicked Witch of the West

The Wiz (stage)
The Wicked Witch of the West in The Wiz, the all African-American version of The Wonderful Wizard of Oz.

She seeks to capture Dorothy, take the silver slippers, and rule all of Oz.

She first appeared in the stage production of The Wiz on Broadway, which was a hit. She is depicted as a large woman with unappealing makeup, and is the second-most powerful witch after Glinda. She wears ugly clothing and a spiky uneven crown on her head. She sits on a strange looking throne which is covered in various and different objects, such as food or meat, including hot dogs on a string. Her slaves, the Winkies, are absolutely terrified of her. She sends her Winged Monkeys to capture Dorothy Gale and the Lion. Later she tries to take the Silver Shoes from Dorothy, but the Lion distracts her by calling the Witch "your royal fatness". This makes her outraged, but as she tries to kill the lion for the insult, Dorothy throws a bucket of water on her. This causes Evillene to scream in agony and soon combusts into a cloud of smoke . She is portrayed by Mabel King on the original Broadway run.

She appeared again in the 1978 film production of The Wiz once again portrayed by Mabel King. Instead of a castle, she lives in the sewers and underground domains of Oz, a gigantic Sweatshop of never-ending labor that she rules over and completely controls. She sleeps most of the day and wakes up in the afternoon, which pleases her. When she comes out of her chambers she sits on a gigantic throne next to a flaming furnace of fire. Yet her throne is actually a giant dirty toilet, decorated in tacky and gaudy items. She screams, yells and shouts a lot which fills her slaves (The winkies, poppy girls, the crows, and the subway peddler) with great fear and she will put an end to anyone who questions her authority. She calls her biker gang "Flying Monkeys" to capture Dorothy and her friends. Once captured, Evillene tortures Dorothy and her friends. This includes Dorothy's little pet dog, Toto, with Evillene threatening to burn him alive. But just as Dorothy is willing to surrender, the Scarecrow, while still split in half, hints Dorothy toward a fire alarm. Just as Evillene screams at Dorothy, Dorothy pulls the fire alarm, activating the sprinklers and putting out the fire; this also manages to melt Evillene (as a result of her being allergic to water) as she disappears and is flushed down her toilet throne.

She appeared yet again in the 2015 TV special The Wiz Live! portrayed by R&B singer Mary J. Blige. This incarnation of the Witch looks significantly less ugly than the ones from the Broadway musical and the movie, although the people of Oz still don't think she looks as beautiful as Glinda does. After the death of Evillene's sister, Evamean, the Wicked Witch of the East, Evillene claims the whole East portion of Oz for herself, and enslaves the Winkies to work in a gloomy and leaky factory. When Evillene learns that Dorothy and her friends have embarked on a mission to try and kill her, she commands her Winged Warriors to bring them to the factory, where she also makes them her slaves. As Dorothy refuses Evillene's demands to give her Evamean's Silver Slippers, Evillene threatens to kill her friends by cooking the Cowardly Lion in a stew, to construct the Tin Man into a pot, and to burn the Scarecrow to stoke a fire. Dorothy intervenes with the switchblade-wielding Evillene's efforts to kill the Lion, prompting the Witch to threaten to eat her, as well. However, Dorothy fights back by dumping a bucket of water all over Evillene, who then evaporates away in a cloud of smoke.

In the 2008 Disney Channel series Wizards of Waverly Place, there was a character named Dr. Evilini. She was an antagonist near the end of the shows 1st season. 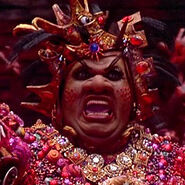 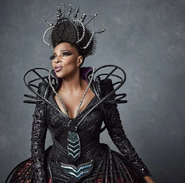 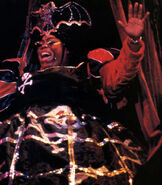 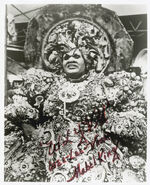 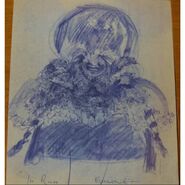 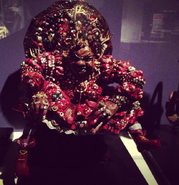