"Here's a delightful animated musical based on the ever-popular story of The Wizard of Oz. Sid Caeser stars in three roles - as the Wizard, the narrator, and as U.N. Krust, a living, talking mince pie who speaks with a different accent every time he utters a phrase!"

"Kids everywhere are welcomed back to Oz, to renew their acquaintances with old friends - Dorothy, the Wizard, the Lion, the Tin Man, and the Scarecrow - and to meet the newest members of the Oz family. There's Jack Pumpkinhead, Tik-Tok, Tyrone the Terrible Toy Tinker and the Hungry Tiger - and together you'll have the most exciting adventure ever!"

In Kansas, Dorothy Gale wakes up from a dream about Oz as Aunt Em and Uncle Henry are prepairing a final Thanksgiving feast before they leave for a retirement home because they owe too much money to the bank and will have Dorothy live with her cousins. Aunt Em places a mince pie unto the windowstill and a pair of hands swipes them. Dorothy along with Toto chase after the thief who runs into a tent only to find out it is the Wizard. He explains to her that after leaving Oz, he countinued as a ballonist and shows her a giant green turkey balloon, however though, the balloon slips the Wizard's hands and its mouth grabs the pie as Dorothy and Toto clutch onto the sting and are taken to Oz.

Upon arriving, she meets Jack Pumpkinhead who tells her about Tyrone the Terrible Toy Tinker who is building up an army of large toys that he will bring to life using the Powder of Life as to take over the Emerald City. As Tyrone is hiding in the bushes, he steals a large jar of the powder from Jack and uses on the turkey balloon to bring it to life as he names it the Green Gobbler of Oz.

A bit of powder also brings the Mince Pie to life as the three decide to confront Tyrone in his castle, but to get there, they have to go through a dark cave which is the home of the Hungry Tiger and the run-down Tik-Tok whom Dorothy winds up. They get to the castle and Dorothy tells Tyrone she is not afraid of him which has him explain his story of being a toy-maker. She convinces him not to use the powder for evil because his toys could be given around Christmastime. He agrees, but then Jack, the Pie, the Hungry Tiger, and Tik-Tok make it up to the top and still think Tyrone is evil. He explains he has become good, but as he does, the jar of powder falls off the mountain which is an exctinct volcano which brings it to life as it erupts. Right before it does, Tyrone calls the Green Gobbler and they all hop on to safety.

In the Emerald City, they meet Ozma who thanks Dorothy and her friends for saving the day. In explaining that if she wanted to go back to Kansas, she would be away from her new friends, so she uses her magic to bring her Kansas home to Oz with Aunt Em, Uncle Henry, and the Wizard in it (who was hiding in the chimney) as they all have a Thanksgiving feast. 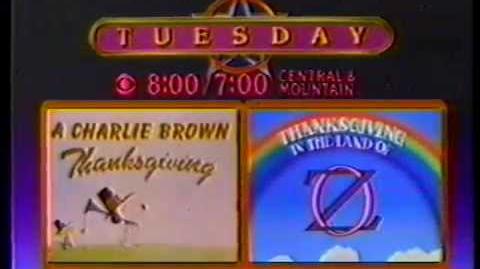 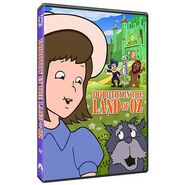 DVD cover
Add a photo to this gallery

Retrieved from "https://oz.fandom.com/wiki/Dorothy_in_the_Land_of_Oz?oldid=70593"
Community content is available under CC-BY-SA unless otherwise noted.