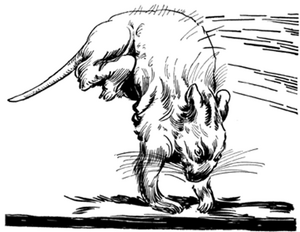 Chiss is a creature that lives in the Land of Oz and causes trouble along the Yellow Brick Road in the Munchkin Country.

Chiss resembles a porcupine, but is considered an evil spirit. It is the size of a ten-bushel basket and its sharp quills resemble arrows and make it look four times bigger than it really is. It has the ability to shoot its quills from its body. It apparently does not have the ability to grow new quills, as it must gather up its quills and put them back in its body after firing them.

Ojo and his party encountered Chiss when it tried to block their path on their way to the Emerald City. The disagreeable creature threw its quills at them, but the Patchwork Girl shielded her friends. To punish the creature, the group took Chiss' quills and dropped them into a river so that he could not attack anyone again. (The Patchwork Girl of Oz)

Retrieved from "https://oz.fandom.com/wiki/Chiss?oldid=26296"
Community content is available under CC-BY-SA unless otherwise noted.