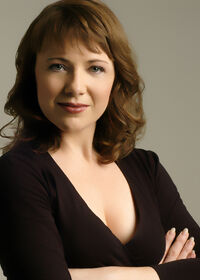 "The sun will come out tomorrow. Bet your bottom dollar that tomorrow, there'll be sun. Just thinkin' about tomorrow clears away the cobwebs and the sorrow 'til there's none."
―Aileen Quinn as Annie

"If you have hope to count on, your hopes are not in vain, 'cause you can't count on rainbows without rain. You'll find it's strictly up to you. Take your dreams, and make your dreams come true."
―"It's Strictly Up To You", The Wizard of Oz (1982) opening theme performed by Aileen Quinn, the voice of Dorothy Gale

Aileen Marie Quinn (born June 28, 1971) is an American actress, singer,and dancer. She is best known for having played the title role in the film Annie in 1982. She played the voice of Dorothy Gale in the English dub of the anime movie The Wizard of Oz, also released in 1982.

The Wizard of Oz was an anime movie that originated from Japan. However, unlike most anime, the English dub was released first in 1982. The Japanese version was released later in 1986. Aileen Quinn played the lead role as the voice of Dorothy in the English dub.

In addition to playing Dorothy, she also performed three songs in the movie. The music was written by Jō Hisaishi and Yuichiro Oda. The lyrics for the English dubbed versions of the songs were written by Sammy Cahn and Allen Byrns.

"It's Strictly Up to You" is the main theme, played during the opening and closing credits.

"I Dream of Home" is played while Dorothy and the Scarecrow spend the night at the Tin Woodman's house, as Dorothy dreams of her home back in Kansas.

"A Wizard of a Day" is played after Dorothy and her friends defeat the Kalidah (only one appeared in this adaptation), and as they make the final leg of the trip to the Emerald City, and again as the Winkies celebrate their freedom from the Wicked Witch of the West after Dorothy melts her.

Quinn was born in Yardley, Pennsylvania in 1971. She graduated from Oak Knoll School of the Holy Child in Summit, New Jersey. Quinn was introduced to show business by her mother, Helenann, who was a TV, Radio, and Stage Singer/Actress when Quinn was young. Quinn begged to audition for a part in a local community theater production of Annie Get Your Gun and won a part. She then did a few additional shows in community theater, which then led to getting an agent, a small role in the film Paternity, and commercial work in NYC. She began to appear in a string of television commercials, including “Northern Bathroom Tissue”. While in NYC, she auditioned, and landed the role of the “swing orphan” (understudy to all of the orphans except Molly and Annie) in the Broadway production of Annie. After almost a year of a grueling audition process, and up against over 8,000 other competitors, Quinn received the title role in the 1982 film version, directed by John Huston. Annieearned Quinn two Golden Globe nominations, a win for “Best Actress” from the Youth In Film Awards, and Razzie for “Worst Supporting Actress” .

While under contract for several years with Columbia Pictures to make other Annie sequels which never materialized, Quinn continued to perform lead roles in regional theater in such shows as The Wizard of Oz (Dorothy ), Bye, Bye Birdie (Kim), Annie (Annie), Shenandoah (Jenny), and A Day in Hollywood/A Night in the Ukraine (Harpo). She also lent her voice to two animated cartoon specials which aired on National TV, The Charmkins and The Wizard of Oz. In addition to her Annie film album, which went double platinum, Quinn recorded a solo album titled Bobby’s Girl. Soon after, Quinn starred as Princess Zora in the classic fairy tale, The Frog Prince, which was released on videocassette and aired on the Disney Channel several times.

At the age of 18, Quinn decided to take some time off from acting and pursue higher education. She attended Drew University in Madison, NJ, and graduated with honors in 1994. She was a language major with a minor in political science, and is a member of Sigma Delta Pi, a Spanish honor society, as she is fluent in Spanish. She spent six months with a family in Chile as part of an exchange program, and considers it one of her life’s most rewarding experiences.

After graduation from Drew, Quinn once again took to the stage. In 1994, she appeared as “Bet” in Oliver at Papermill Playhouse. She then toured the United States for over five years with 3 Broadway national tours: Fiddler on the Roof (Chava), Peter Pan (Tootles/Jane) and Saturday Night Fever (Annette). Her quest to study Shakespeare led her to London, where she appeared in As You Like It and Twelfth Night at LAMDA. Off-Broadway productions includeDreamstuff (Princess), Creature (Elizabeth) and Yiddle With A Fiddle (Yiddle). Regional theater credits up to the present include The Unsinkable Molly Brown(Molly), That Was Then (World Premiere Play-April Gregory), and Funny, You Don’t Look Like a Grandmother (her Daughter).

Most recently, Quinn has appeared in a few small roles in independent films between 2006-2010, and just returned from portraying “Lily” in Annie at Theatre Aspen. Currently, she has been writing some original material for her L.A.-based Rockabilly band, “The Leapin' Lizards”, of which she is the lead singer.

Quinn also hosted Generation Gap, an interactive sitcom used to teach kids how to resolve conflicts. It was written and directed by filmmaker Edna Harris and aired on PBS in 2004. Quinn played a minor role in the 2009 film Multiple Sarcasms, starring Timothy Hutton and Mira Sorvino. Quinn is an adjunct theater professor at Monmouth University in West Long Branch, New Jersey. (Monmouth University is coincidentally the same site of the film version ofAnnie, in which Quinn performed as the title character.) She was awarded an honorary degree from Monmouth University in 2009.