Adventures in the Emerald City (Russian: Приключения в Изумрудном городе)  is a four part Russian televison adaptation of The Wonderful Wizard of Oz and The Marvelous Land of Oz released in 1999 and 2000. It is based solely on the Baum adaptations and the only reference to the Magic Land series is that the main character named Dolly is a combined character of Dorothy Gale and Ellie Smith. It was planned to cover all 14 original books, but production was halted. 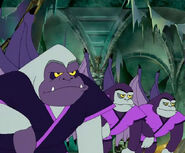 Retrieved from "https://oz.fandom.com/wiki/Adventures_in_the_Emerald_City?oldid=65343"
Community content is available under CC-BY-SA unless otherwise noted.