Oz (aka Oz – A Rock 'n' Roll Road Movie also released as 20th Century Oz in the United States) is a 1976 Australian film written, directed and co-produced by Chris Löfvén. It stars Joy Dunstan, Graham Matters, Bruce Spence, Gary Waddell, and Robin Ramsay; and received four nominations at the 1977 AFI Awards. The musical score is by Ross Wilson (frontman for Daddy Cool and Mondo Rock). The plot is a re-imagining of the 1939 The Wizard of Oz film transferred to 1970s Australia and aimed at an older teen / young adult audience. It was released on DVD in 2004 as Oz - A Rock 'n' Roll Road Movie: Collector's Edition with additional material.The poster and album sleeve for the American release was done by rock artist Jim Evans.

Dorothy (Joy Dunstan) is a sixteen-year-old groupie riding with a rock band, Wally (Graham Matters) and the Falcons. Suddenly, the van is in a road accident, and she hits her head. She wakes up in a fantasy world as gritty and realistic as the one she came from and learns she killed a young thug in the process. A gay clothier, Glin the Good Fairy (Robin Ramsay), gives her a pair of red shoes as a reward to help her see the last concert of the Wizard (Matters), an androgynous glam rock singer. She is pursued by the thug's brother (Ned Kelly) who attempts to rape her on several occasions. She also meets a dumb surfer Blondie (Bruce Spence), a heartless mechanic Greaseball (Michael Carman), and a cowardly biker Killer (Garry Waddell).

Chris Löfvén and Lyne Helms got the idea to make an Australian version of The Wizard of Oz while working in London in the early 1970s. Löfvén was also inspired by David Bowie and wanted Graham Matters to play the lead role.

They moved back to Australia in September 1974, and house sat at the house of David Williamson for six months writing the script. The first draft was rejected for funding but the second got some development from the Australian Film Development Corporation in March 1975, shortly before it became the Australian Film Commission.

Joy Dunstan was a singer and theatre actor who was cast after Löfvén saw her singing at the Flying Trapeze cafe. It was her first movie.

The film was shot in early 1976 over a five week period near Melbourne.

The film was a commercial disappointment on release despite receiving some excellent reviews. It may have been hurt by the fact the soundtrack was not ready before the film came out in July. However the movie was released in the US and has become a cult movie.

Wilson, Gary Young and Wayne Burt were all former members of Daddy Cool. Their biggest hit single "Eagle Rock" had a promo video directed by Löfvén in 1971. By late 1975, Daddy Cool had disbanded and Wilson was waiting out his contract with Wizard Records by producing a Company Caine album for his own label Oz Records. Wilson signed Jo Jo Zep & The Falcons with members Young and Burt to his label. Contractually free, Wilson recorded his first solo single "Livin' in the Land of Oz" and produced Jo Jo Zep & The Falcons' second single "Beating Around the Bush" both released mid-1976 from this soundtrack.

All songwriters according to Australasian Performing Right Association (APRA). 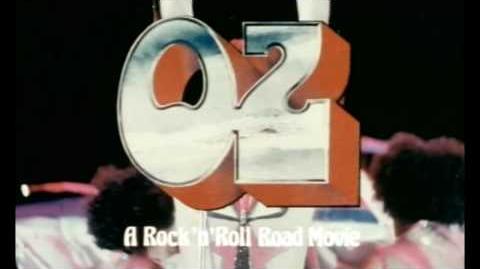 Retrieved from "https://oz.fandom.com/wiki/20th_Century_Oz?oldid=73189"
Community content is available under CC-BY-SA unless otherwise noted.